Yerevan Municipality does not disclose amount of Goran Bregovic`s fee 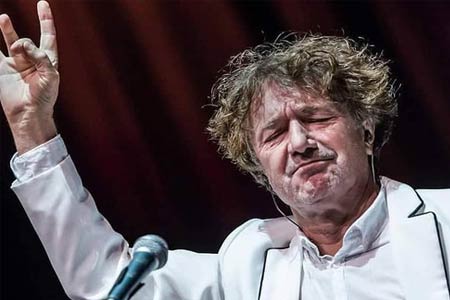 ArmInfo. Yerevan Vice Mayor Hayk Sargsyan does not know what reward the famous Serbian musician Goran Bregovic will receive for performing on New Year's Eve on Republic Square. "I'm not informed, because the company is organizing a  concert, and I don't know how much will be allocated specifically for  the performance and how much for the other services," he said on  December 6, answering a question from a member of the Council of  Elders from the PAP.

Mayor Hayk Marutyan, in turn, in order to receive a concrete answer,  suggested to submit in writing to the Municipality. "An answer will  be received if there are no legal obstacles to that," he explained.

Earlier, ArmInfo reported that this year the lights on the main  Christmas tree of the country will be lit on December 21 at the  Republic Square in Yerevan. There will be the same tree as in the  past. A fabulous city will be built on the territory of the fountains  on Republic Square, a Christmas Market will operate in the square of  the 2750th anniversary of Yerevan, an overpass will be established on  the square with bridges that connect the edges of the square's circle  with a central ring and the main Christmas tree installed on it.  On  Northern Avenue, a demonstration of creative Christmas trees is  planned, etc. The fairytale city will be valid until January 13.

The main event will be a concert by the world famous musician Goran  Bregovic and his orchestra on New Year's Eve on Republic Square.

By the decision of the government, 271 million 797 thousand drams  were allocated for the festivities this year, to which 54 million  drams allocated by the budget of Yerevan will be added. Later it  became known that the Municipality of Yerevan wants to increase the  costs of events by another 270 thousand drams. The indicated amount  is going to rent LED screens.