Czech experts: Tailing dumps in Akhtala and Mets Ayrum can be  dangerous for local residents 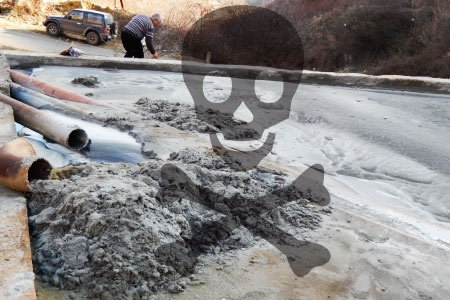 ArmInfo. Tailing dumps in Akhtala and Mets Ayrum can be dangerous for ecosystems and local residents.  Executive director of the Czech "Arnika" Chemical Safety  Organization Jindrich Petrlik  announced this on December 6 in  Yerevan.

Within the framework of the program on toxic substances and wastes  implemented in the Lori region of the Republic of Armenia with the  assistance of the Czech Foreign Ministry, factors of concern for  experts were identified. Previously, cases of leakage and discharge  of tailing dumps (mining waste) were recorded, which can cause soil,  water pollution, as well as the accumulation of heavy metals in  vegetation.

A study by Arnika confirmed the unsatisfactory functional substance  of the tailing dump in Mets Ayrum.  The soil sample taken in the  village of Chochkan revealed a high content of arsenic and copper.

"This confirms the results of our studies in 2018 in the vicinity of  the tailing dumps, where high concentrations of copper and arsenic  were also found near the village of Chochkan," Jindrich Petrlik    said.  Based on the screening analysis, it can be assumed that, in  the event of discharge or leakage of waste into the environment,  there is a risk of contamination of the sediment and the creation of  an imbalance ph. Also, an additional threat is created by easy access  to the tailing pond, as well as the absence of fences and hazard  warning signs.  In addition, according to experts, it is necessary to  check the strength and stability of the base of the tailings dam.    Currently, there are three tailing dumps in the Akhtala community of  Lori region of Armenia, one of which is active. It is noted that it  is in close proximity to some communities, which causes concern among  local residents. So, there were cases of dumping and leakage of  tailings (mining waste), as a result of which they fell into the  Debet River. Earlier in the region, studies were carried out  regarding the content of heavy metals in the environment, the results  of which revealed high levels of arsenic, lead and copper. The  project on toxic substances and waste in the Lori region of Armenia  was implemented with the support of the Transition program of the  Ministry of Foreign Affairs of the Czech Republic. The project was  supported by the NGO EcoLur and CCMS (Center for Community  Mobilization and Support).