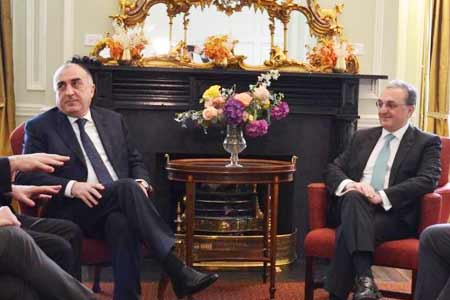 ArmInfo. Foreign Ministers of Armenia and Azerbaijan, Zohrab Mnatsakanyan and Elmar Mammadyarov at the meeting, held as part of the meeting of the OSCE Ministerial Council in Bratislava with the mediation of the co-chairs of the OSCE  Minsk Group, held extensive discussions. The meeting lasted more than  three hours.

APA reports that the Ministry of Foreign Affairs of Azerbaijan  disseminated information about this.  It is reported that the parties  discussed the current situation to resolve the conflict and ways to  resolve it in the future.The ministers agreed to continue negotiations and hold another  meeting early next year.  The meeting was attended by co-chairs of  the OSCE Minsk Group - Igor Popov, Andrew Chauffer, Stefan Visconti,  as well as personal representative of the OSCE Chairman-in-Office,  Andrzej Kasprzyk.