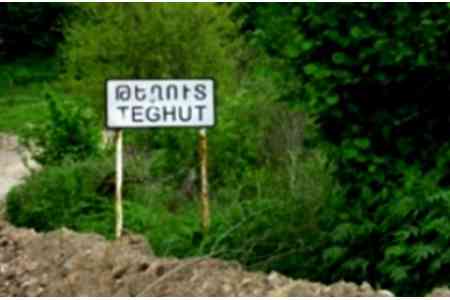 ArmInfo. The results of the study of the stability of the dam of the Teghut tailing dump will be known in 2020. On December 4, RA Deputy Prime Minister Tigran Avinyan  stated this in parliament, presenting the Government's response to  the request of the Bright Armenia faction.

He recalled that Teghut CJSC was invited to conduct new studies  regarding the sustainability of the tailings dam, and at the moment  these works are being carried out by the Bulgarian company. "The work  started in September, and it will take 6-7 months to summarize the  results," Avinyan informed.  According to him, the relevant  structures had previously studied the status of the tailings, and  there were no conclusions that the dam posed any danger.

The Deputy Prime Minister also said that next year inspections by the  inspection body will be carried out at the Teghut mine.

To recall, the program for the operation of the Teghut   copper-molybdenum mine was approved by the Armenian government in  November 2007. By reserves, the Teghut mine is the second in the  republic after the Kajaran copper and molybdenum mine in Syunik. Back  in 1972, large-scale geological exploration work was carried out  here, according to the results of which reserves of 450 million tons  of ore with a content of 1.6 million tons of copper and 99 thousand  tons of molybdenum were confirmed. Due to environmental problems, the  project was suspended in February 2018, which had a negative impact  on the country's economy.

As previously reported, the Bulgarian company is conducting an  engineering geological and hydrogeological study of the stability of  the tailings and dams at the initiative of Teghut CJSC.

Meanwhile, the status of the dam of the Teghut tailings mine was  thoroughly investigated back in 2017, and then foreign experts came  to the unequivocal conclusion that it functions with serious flaws.  The dam is gradually eroded from the inside and may break through in  the near future. Actually, these expert assessments formed the basis  for the termination of financing of the Teghut project by one of the  western lenders, because of which the mine had to be suspended in  2018.