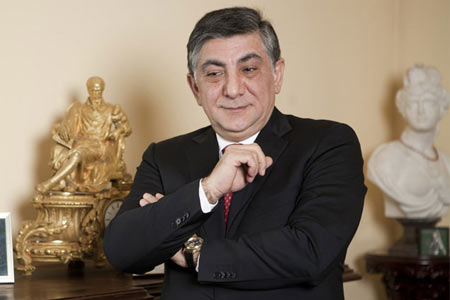 ArmInfo. Businessman Khachatur Sukiasyan does not share the views of  business figure Gagik Tsarukyan that the corresponding conditions for doing business and  making investments are not created in Armenia. He said this on  December 2 in an interview with reporters on the sidelines of the  opening of the "ADL Diamonds" cutting factory.

According to Sukiasyan, today, if a business is faced with problems,  then all of them are within the law. As the businessman pointed out,  there are still entrepreneurs who emotionally assess the situation  and speak negatively about the new government. Meanwhile, having  delved deeper into the task, it turns out that the problem was  far-fetched, he noted. "The fact that equal competitive conditions  have been created for everyone today, there is no corruption and  antitrust tools are in effect - this is a revolution," he said.

To recall, on November 7 at the opening of the 'Ceramisia' plant,  owned by Gagik Tsarukyan's family, leader of the Prosperous Armenia  opposition party and head of the parliamentary faction of the same  name, Gagik Tsarukyan, stated that he was dissatisfied with the  conditions for investment in Armenia. According to him, the paperwork  takes a lot of time, and businessmen can not wait long. "I really  respect the Prime Minister, understand me correctly. He wants to do  his best, but there are no necessary conditions for investments. "  Tsarukyan noted.