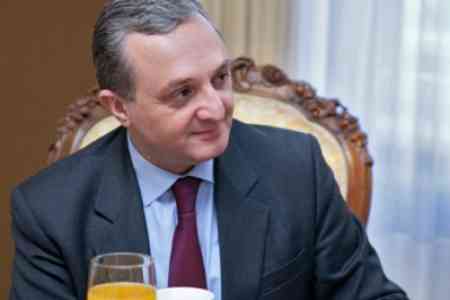 ArmInfo. Armenian Foreign Minister Zohrab Mnatsakanyan and Director of the OSCE Office for Democratic Institutions and Human Rights (ODIHR) Inhibjerg Solrun  Gisladottir during the meeting in Yerevan pointed out the important  role of the human rights defender institution in Armenia, noting that  the establishment of this structure will contribute to the systemic  protection of human rights in republic.

As reported by ArmInfo in the press service of the Ministry of  Foreign Affairs of the Republic of Armenia, at the meeting the  interlocutor also touched upon the issues of the OSCE agenda and  Armenia's active involvement in the platform for protecting the  Organization's human rights.

In the context of strengthening democratic institutions in Armenia,  the parties praised the parliamentary elections held last year in the  republic, in accordance with international standards and with the  constant assistance of the ODIHR.

Mnatsakanyan spoke about reforms in the judicial system and the fight  against corruption, pointing out the importance of international  partners assisting in this matter.

In turn, Gisladottir congratulated Mnatsakanyan on the election of  Armenia to the UN Human Rights Council. In this regard, the head of  the Armenian Foreign Ministry confirmed Armenia's commitment to  stimulate the agenda for the protection of human rights and the  prevention of genocides and crimes against humanity.

At the same time, he assured that for Armenia human rights remain a  universal value, and the interaction for their protection should also  be universal, and also involve people living in conflict zones. As a  priority on the agenda of the Armenian government, the Minister of  Foreign Affairs emphasized the importance of protecting the rights of  women and children, religious and ethnic minorities, including  expanding the participation of women and youth in the country's  public life.