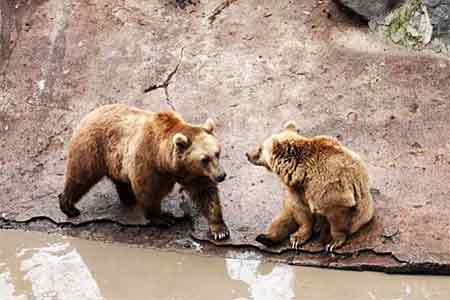 Speaking about the appointment, the Deputy Mayor called it important  that the acting director of the Zoo is an employee in this apparatus  and in a sense is aware of the problems of the park.  To recall,  former director of the Zoo Ruben Khachatryan submitted his  resignation after the mass death of animals, when a pack of stray  dogs entered the Yerevan zoo twice a day and attack three mouflons  and three kangaroos. Assessing the activities of the former director  of the Zoo, Tigran Virabyan called the work Khachatryan large-scale,  in which the employees were not indifferent.

At the same time, Virabyan stated that Khachatryan will continue to  promote the park and share his professional experience. "We are also  confident that specialists will help to ensure that no new problems  arise during this transition period," Virabyan said, assuring that  the Zoo will continue along the same path.

The Deputy Mayor emphasized that today the park has several priority  tasks, the solution of which should be found as early as next year,  explaining that the agenda of the Municipality contains issues  related to fencing the territory and ensuring the Zoo's safety, as  well as medical insurance for the institution's employees. <Changes  are a requirement of the time, but this does not mean that radical  changes are expected in the state. People who are involved in buying  and selling animals or have other interests cannot work here,  "Virabyan said. After the meeting, Virabyan held a separate meeting  with the staff. It was reported on the creation of a narrow-profile  working group to organize more efficient zoo activities. It was also  noted that the zoologist Iman Memaryan from the Islamic Republic of  Iran was invited to Armenia, who, after processing the documents and  obtaining Armenian citizenship, will take the position of deputy  director of the Zoo. He ran the Tehran Zoo for many years and  collaborated with a number of international zoological organizations.