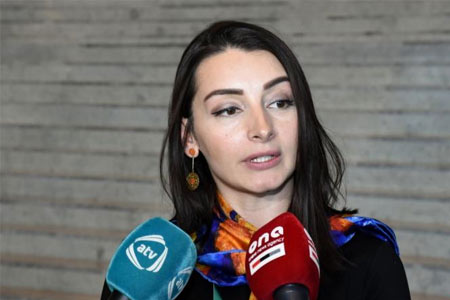 ArmInfo.In Azerbaijan, they answered the Prime Minister of Armenia Nikol Pashinyan regarding the separation of Nagorno-Karabakh from the Azerbaijan SSR.  Thus,  the press secretary of the Ministry of Foreign Affairs of Azerbaijan  Leyla Abdullayeva assured that what was said by the Prime Minister of  Armenia can be described as "at least an attempt to mislead one's own  population".

According to her, another assessment of this is not possible.  "Pashinyan, once again, referring to the Constitution of the USSR,  pretentiously claims that the Nagorno-Karabakh Autonomous Oblast  (NKAO) allegedly had a constitutional right to secession. For our  part, we again recall that in accordance with Articles 78 of the  Constitution of the USSR, the territory of a union republic could not  be Thus, in a situation where the unilateral separation of the  Armenians of the NKAR was contrary to Soviet law, how, in addition to  misleading their own population, attempts can be described as prime  ministers Nistra justify this by the Constitution of the USSR? N.  Pashinyan notes that the Oblast Council of NKAO exercised its right  to self-determination, but the Prime Minister is silent that the  referendum on independence, held in Nagorno-Karabakh on December 10,  1991, was organized without the consent of Azerbaijan, of which it  was legally a part this autonomous region, and the Azerbaijani  population of the region did not take part in it, "said Abdullayeva.

At the same time, the Ministry of Foreign Affairs of Azerbaijan noted  that, unlike their predecessors, N. Pashinyan positions himself in  front of the international community as an adherent of democratic  values.  "Well, now he needs to confirm this and de-occupy the  territory of Azerbaijan so that civilians return to their places of  original residence," Abdullayeva said.

Recall that Nikol Pashinyan, at a meeting with representatives of the  Armenian community of Milan in the Armenian Church of Forty Babies,  reacting to the allegations of the Azerbaijani video blogger,  emphasized that the people of Nagorno-Karabakh decided in 1988 to  secede from the Azerbaijan SSR on the same legal basis on which the  Azerbaijan Republic decided on secession from the USSR. "The decision  of the Karabakh people was rebuffed from Azerbaijan, the civilians of  Stepanakert were subjected to continuous bombing and shelling from  Shusha. Then the people of Nagorno-Karabakh organized self-defense  forces and managed to stand up for themselves. Azerbaijan's attempts  to resolve the issue were unsuccessful and Azerbaijan will not be  able to resolve this issue by force. I proposed a peace formula to  the President of Azerbaijan. I am the first leader of Armenia who  stated that any solution to the Nagorno-Karabakh problem should be  acceptable to the peoples of Armenia, NKR and Azerbaijan . Ydzhana  propose Ilham Aliyev made a similar statement, as a platform of peace  and stability in the region ", - said Nikol Pashinyan.