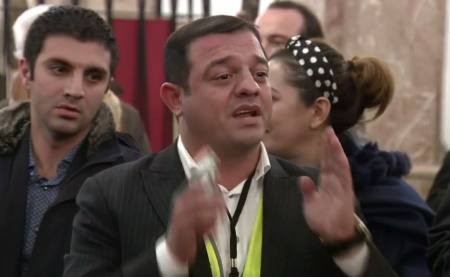 ArmInfo.During a meeting between the Prime Minister of Armenia, Nikol Pashinyan, and representatives of the Armenian community of Milan, an unusual  incident involving an Azerbaijani video blogger occurred in the  Armenian Church of Forty Babies.

After Pashinyan answered another compatriot's question, a briefing  was interrupted by a certain Azerbaijani who called himself a video  blogger: "The whole world recognized the genocide of Azerbaijanis by  the Armenians when it stops. Stop this war, we don't need a war,  liberate our lands, Mr. Minister so that I see my Khojaly, my Shushi.  I want peace, when will there be peace? ", he said.

Not at all bewildered and asking the audience to calm down, Pashinyan  replied: "It is necessary to fix that the Azerbaijani is in the  Armenian church and asks the head of the Armenian government. It is  impossible to imagine that such an opportunity would be given to the  president of Azerbaijan, Ilham Aliyev, the Armenian," he pointed out.

Pashinyan called the words of a video blogger about the "genocide of  Azerbaijanis" an ordinary lie, since even the former president of  Azerbaijan, Ayaz Mutalibov, in an interview with the Russian  Nezavisimaya Gazeta acknowledged that the Azerbaijani opposition had  organized the events in Khojaly in order to carry out a coup in  Azerbaijan.

Prime Minister, declare that the people of Nagorno-Karabakh in 1988  decided to secede from the Azerbaijan SSR on the same legal basis on  which the Azerbaijan Republic decided to secede from the USSR. The  decision of the Karabakh people was rebuffed from Azerbaijan,  civilians of Stepanakert were subjected to continuous bombing and  shelling from Shushi. Then the people of Nagorno-Karabakh organized  self-defense forces and managed to fend for themselves. Azerbaijan's  attempts to resolve the issue by force have been unsuccessful and  Azerbaijan will continue to fail to resolve this issue by force.  "I  proposed a peace formula to the President of Azerbaijan. I am the  first leader of Armenia who stated that any solution to the  Nagorno-Karabakh problem should be acceptable for the peoples of  Armenia, NKR and Azerbaijan. I suggest Ilham Aliyev to make a similar  statement, since it is a platform for peace and stability in the  region," - emphasized Nikol Pashinyan.

"Karabakh is always Azerbaijan," the Azerbaijani shouted and  retreated, asking for security, which was done.