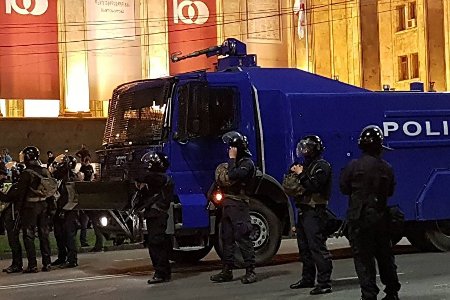 Before that, the police warned the protesters about the need to free  the territory from the country's parliament.

According to Georgian media, after the use of a water cannons by the  police, some of the protesters left Zubalashvili Street, and some  again tried to resist the special forces with raised hands,  preventing them from taking the venue.

To note, before the crackdown began, Georgian law enforcement  officers granted the organizers of the rally 30 minutes to free the  territory of parliament.

To recall, the protests in Georgia broke out after the country's  parliament last week failed the adoption of the bill on the  transition to a proportional election system. For several days,  protesters have been spending the night at the parliament, and today  they have completely paralyzed the activities of the legislative  body, not allowing deputies to enter the building.