President of Germany will visit Armenia in 2020 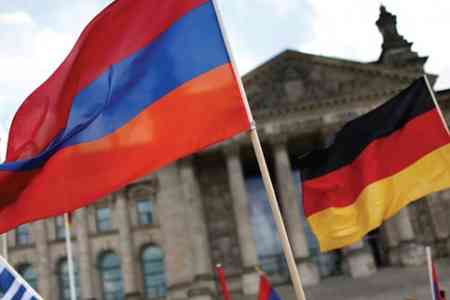 ArmInfo. On November 18, the  President of the RA National Assembly Ararat Mirzoyan received the  Ambassador of the Federal Republic of Germany to the Republic of  Armenia Michael Banzhaf, the press service on the RA NA reports.

Congratulating Michael Banzhaf on beginning his diplomatic mission in  Armenia, Ararat Mirzoyan has noted that there are rather serious and  partnership relations between Armenia and Germany, particularly  between the two countries' parliaments, and the active mutual visits  at highest level in recent period witness to that.  The NA President  has welcomed the implementation of the various programmes being  financed or technically supported by Germany, which are directed to  the continuity of democratic reforms in Armenia and the development  of Armenia in general. Ararat Mirzoyan once again has assured that  the Armenian authorities are resolute on the way to making democratic  reforms, and there will not be regress in this respect. He noted that  Armenia would continue its efforts in strengthening the global  security and in this aspect highlighted the cooperation between  Germany and Armenia in the frameworks of the NATO - Partnership for  Peace programme. The NA President has greeted the visits of different  MPs of Bundestag to Nagorno Karabakh (NK), which gives a very good  opportunity to get acquainted with the problem on the spot and has  underlined that irrespective of the NK problem not being solved  Armenia will continue protecting the rights of the people living  there.

The parties talked about various educational programmes and the good  traditions formed between the parliaments of the two countries. "I am  sure that the relations between our countries and our parliaments  will go on abruptly developing, and you will have your contribution  there. I wish success to you," Ararat Mirzoyan said.

Ambassador Michael Banzhaf has expressed his gratitude for  congratulation and has noted that he is glad to be in Armenia and  work. "I fully hope that we'll resume our good cooperation. You  mentioned a great palette of German-Armenian cooperation to which I  would like to reflect upon. You genuinely noted about effective  cooperation, which more developed after the Velvet revolution. You  also mentioned about the high ranking officials' visits, which have  more strengthened the relations," the Ambassador said, informing that  next year the visit of the President of the Federal Republic of  Germany to Armenia is scheduled Michael Banzhaf has stated that  during his short visit he has already seen the Armenian people's  great will in continuing the democratic reforms, and while making  reforms a great role is reserved to the parliament, and Germany is  ready to show expertise support to the MPs of Armenia. "I think that  the agenda of our bilateral relations in near future are rather full,  rather weighty and will allow us registering results. We are glad for  the democratic course adopted by Armenia, the democratic reforms: it  raises Armenia by one degree from different states being on the world  platform, where the tendencies are to turn to more authoritarian  system. Armenia is one of the unique examples that insistently goes  through democratization way, and which is worth of our support," the  Ambassador of Germany to Armenia underlined.