Armenian ability to make money from practically nothing 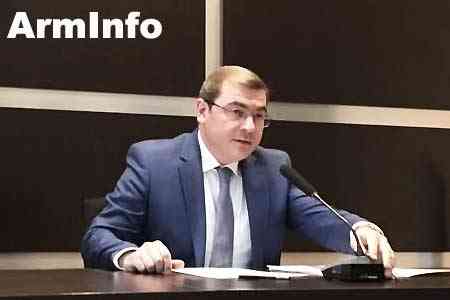 ArmInfo. In late November and  early December 2019, vehicles customs registration will be fully  carried out in Gyumri for vehicles imported across the northern  border - the Bavra, Gogavan and Bagratashen checkpoints. This was  announced by David Ananyan, Chairman of the State Revenue Committee  (SRC) on November 18 in an interview with reporters.

Ananyan recalled that since October 14, customs office of motorcars  imported into Armenia Georgia and Japan and has been carried out at  the Northern Customs Point, and with import from Iran, at the  Southern Customs Point, in Sisian city. Customs registration of  vehicles imported into Armenia by trailers across the  Armenian-Georgian border, belonging to commodity group 8703 in the  Commodity Nomenclature of Foreign Economic Activity, has also been  carried out in Gyumri since November 18, 2019. By the end of  November, Armenian customs officials will announce that the customs  registration of vehicles assigned to product group 8703, transported  in containers, will be transferred to the Northern Customs Office (in  the city of Gyumri), thus fully transferring the function of customs  registration of cars in the city of Gyumri.

As for the complaints of citizens and the accumulation of vehicle  importers at the Gyumri customs office, according to the head of the  State Customs Committee, they were mainly due to the fact that only  one branch of "Araratbank" served the citizens here, which could not  cope purely due to the physical volume of work. In addition,  according to the chief tax official, "compatriots showed  resourcefulness here too." "They came up with a new form of doing  business: they came to a car customs at night, removed license plates  from cars, stood in line and sold their place in line to others in  the morning." We informed about the problem in time and our  colleagues from the Police quickly resolved the issue and today, I  think, people do not face a similar task, "he said.

It is planned that the vehicle customs office in Gyumri, which will  provide services on a one-stop basis - not only customs registration  will be carried out here, but also registration of vehicles and  issuance of numbers, will serve 1000-1200 vehicles daily. As the head  of the State Customs Committee assures, the issue of accumulations of  cars at the Noragavit vehicle customs office will be resolved before  the end of 2019.

Earlier, ArmInfo reported that a program was launched in Armenia to  establish a new vehicle customs office in Gyumri. The total cost of  the program is 2.2 billion drams. The intentions to transfer the  vehicle customs office for imported cars from the vehicle customs  office in Noragavit to Gyumri come from the order of the Prime  Minister of the Republic of Armenia in connection with an  unprecedented increase in the import of motor vehicles from countries  that are not members of the EAEU. The new paragraph is intended to  become part of the center for the promotion of foreign economic  activity. Construction is planned on the territory of 21.5 hectares  owned by the Ministry of Defense. 4.5 hectares from this territory  will be allocated for the establishment of a customs and police  service center. 181 mln drams were allocated at the first stage of  construction of the SRC vehicle customs office, and 966 mln drams at  the second stage.