MP: Crisis around the Constitutional Court of Armenia is a result of  inertia inherited from earlier times 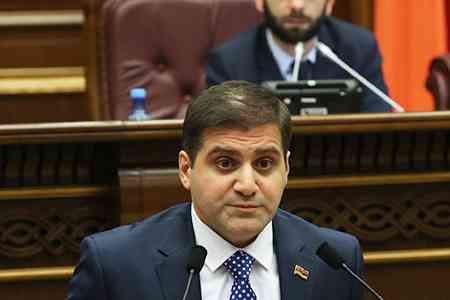 ArmInfo.The crisis around the Constitutional Court of Armenia is caused by the inertia  inherited from earlier times. The lawmaker of the National Assembly  of the Republic of Armenia Arman Babajanyan has a similar opinion.

Speaking at the discussions on the situation around the  Constitutional Court organized on November 16, the MP pointed out the  importance of separating the roles, functions and powers of the  Constitutional Court after the country's transition to the  parliamentary form of government. In the new conditions, according to  the MP, the role and place of the Constitutional Court is more than  important, since this body is a deterrent in decision-making by the  government and parliament. Babajanyan believes that in this situation  the authorities themselves are not fully aware of the way out of this  situation, which has become the reason for the ongoing crisis for a  long time. The attitude of the parliament, which was a kind of  appendage of the RA government, can be considered exactly the inertia  of earlier times, and the role and place of the National Assembly was  not perceived at the proper level. This is also evidenced by the  sometimes absurd statements of some members of the Constitutional  Court, especially against the background of the high level of  legitimacy that the country's parliament currently has. In the same  way, the entire judicial system, including the Constitutional Court,  should have the same level of legitimacy, which will lead to the  strengthening of democratic values, and increase confidence in the  judicial system as such. In this situation, the deputy continued, the  former authorities will do everything possible to maintain influence  on the Constitutional Court.

Earlier in October of this year, RA Minister of Justice Rustam  Badasyan noted that a civilian way to resolve the crisis in the  Constitutional Court is the early retirement of Constitutional Court  judges. He emphasized that the Ministry of Justice had already  drafted a bill that would soon be debated in the government and then  sent to the National Assembly.

As ArmInfo previously reported, on September 14, the Armenian  Constitutional Court rejected the consideration of the deprivation of  authority of its head Hrayr Tovmasyan. At the meeting of the  Constitutional Court in the case of Hrayr Tovmasyan, in addition to  Tovmasyan himself, the recently elected judge Vahe Grigoryan was  absent. The only judge to vote "for" the deprivation of Tovmasyan's  authority was Felix Tokhyan. Even the second elected judge, Arman  Dilanyan, voted against considering the question of depriving a judge  of his powers.

On October 4, the National Assembly of Armenia with 98 votes in favor  "1 vote against" adopted the appeal prepared by the parliamentary  fraction of the "My Step" bloc to the Constitutional Court on the  termination of the powers of Hrayr Tovmasyan. The initiative of the  ruling party was initially supported by colleagues from the Bright  Armenia faction. In a statement by the parliament, the Constitutional  Court presented four grounds for terminating Tovmasyan's powers.  First, he did not have the right to participate in the consideration  of the Constitutional Court "the Kocharyan case", since it was  connected not only with him, but also with the Republicans, in  particular, with former President Serzh Sargsyan. Second, Tovmasyan  is the godfather of lawyer Kocharian Aram Orbelian. Third,  Tovmasyan's previous statements on the "March 1 case" give reason to  consider his position partial. Fourth justification - Tovmasyan  neglected all these circumstances and did not report the  impossibility of his participation in the consideration of the  "Kocharyan case".