Orientalist: The war in Syria is a big geopolitical game and it is  also a gamble that may end badly for Turkey 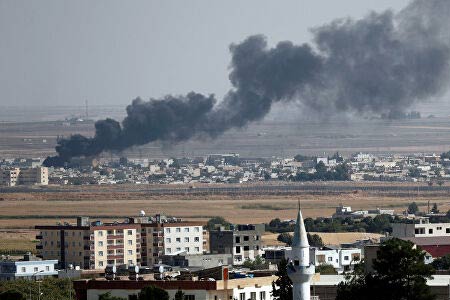 ArmInfo. NATO is approving a new  stage of rapprochement in Turkish-American relations. Director of the  Institute of Oriental Studies of NAS RA, Orientalist Ruben Safrastyan stated this at a meeting with reporters.

According to the expert, the hottest problem that currently exists in  Turkish-American relations is Turkey's bunker deal for Russian S-400  air defense systems, which the parties decided to put aside. "After  meeting with Trump, Erdogan said that the United States fundamentally  agreed to sell the Patriot system to Turkey, which means that certain  changes have occurred in the approaches of the American side,"  Safrastyan noted.

Another issue around which the parties were able to agree, Safrastyan  called the Kurdish issue, which, in turn, is linked to the oil  factor. The expert is sure that the Americans will continue to hold  in their hands oil wells located in Syria, mainly east of the  Euphrates, inhabited by Kurds.

To note, according to rough estimates, the United States receives a  profit of $ 30 million every month, the profit from which, according  to the Americans, goes to the aid of the Kurds. Oil is exported and  sold, presumably through Turkey.

Safrastyan believes that in all likelihood, the parties also agreed  that the ethnic cleansing of Kurds from the Turkish-Syrian border  will continue, which is a long-standing requirement of Turkey, and  will concentrate on those territories where the mines are located.

According to Safrastyan, the Americans are in favor of such a  scenario, so that when the real settlement process begins in Syria,  through the Kurds to create some kind of autonomous Kurdish entity  that will be under American control and will create an opportunity  for them to continue to use oil wells .  According to expert  estimates, today the United States is demonstrating a rejection of  classical geopolitical approaches, and is developing a new strategy,  resulting in leverage over the leadership of different countries.    <Times are changing, and with them political strategies. The US  begins to pursue a point foreign policy.  Trump took control of the  important for the US oil fields in Syria. The rest for them becomes  secondary and uninteresting. However, the new US strategy that it is  deploying in Syria needs the support of Turkey.  In turn, Ankara,  using its geographical and geopolitical position, ensuring that the  United States turned a blind eye to the sanctions that they  themselves have imposed, makes concessions where Turkey is launching  aggressive actions. In this regard, the sanctions against Ankara will  not only not be toughened, but on the contrary will be relaxed>, the  expert assured.

The orientalist recalled that a meeting between Erdogan and Putin  will take place in Istanbul on November 19, where, according to the  expert, Turkey will speak with another person favorable to Russia.  <This is a big geopolitical game, but I think it is also a gamble  that may have a bad end, first of all, for Turkey>, Safrastyan does  not exclude.