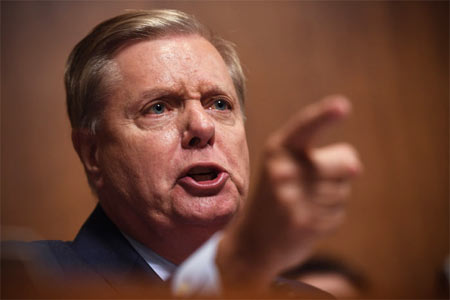 ArmInfo.US Senator Lindsay Graham (Republican from South Carolina) blocked the vote on the draft resolution on the Armenian Genocide in the upper house of the US  Congress.

In response to a proposal by Democratic Senator Robert Menendez to  vote in the Senate for a draft resolution on the Genocide, Graham  blocked the vote.

"A few hours ago, I discussed with the President of Turkey Recep  Tayyip Erdogan and the head of the White House Donald Trump the  problems that we encountered in Syria due to the military operation  of Turkey. I also hope that Turkey and Armenia will be able to  discuss this issue among themselves (events of 1915 ). Senators  should not "rewrite history" and perceive historical realities  differently from what they actually were, "said the Republican  senator, whom Anadola brings.

Lindsay Graham called on congressmen to take into account the  prospects for Turkish-American relations when making decisions.

Any member of the US Senate has the right to block the vote on draft  resolutions.

On October 29, the US House of Representatives adopted resolution No.  296 on the recognition of the Armenian Genocide. The document was  added to the Congress agenda in April.