President of Greece: If genocides are forgotten, such crimes will be  repeated again 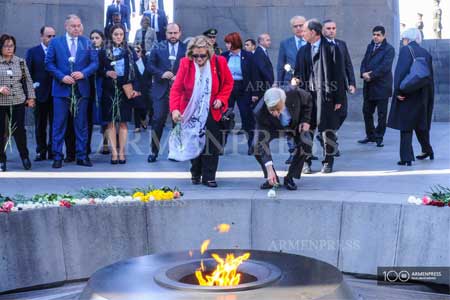 ArmInfo.Greek President Prokopis Pavlopoulos, who is on an official visit to Armenia, visited the Tsitsernakaberd memorial complex for the victims of the Armenian  Genocide, laying a wreath at the memorial and flowers to the eternal  flame, paid tribute to the memory of the holy martyrs.

As ArmInfo was informed in the press service of the Armenian Genocide  Museum-Institute, the Greek delegation also visited the  Museum-Institute and got acquainted with the exposition. The  President of Greece left an entry in the book of Memory.

Pavlopoulos, in an interview with reporters, noted that the memory of  the Armenian Genocide should be preserved, since if genocides are  forgotten, such crimes against humanity will be repeated again. "This  is a message from Yerevan to everyone. You see that such crimes are  repeated in the world, and there are individuals who are the enemies  of man and civilization. We experienced the same horror as the  Armenians. I am immensely grateful to the President of Armenia and  the Government for hospitality," the President said Greece, recalling  the centuries- old common history, and pointing out the need to  preserve a common memory.  The President of Greece also planted a  blue spruce in the Alley of Remembrance.

To note, Prokopis Pavlopoulos arrived in Yerevan at the invitation of  Armenian President Armen Sarkissian. At the Zvartnots International  Airport, the Greek President was met by Minister of the Environment  Erik Grigoryan and his wife.

Then, at the residence of the President of the Republic of Armenia,  the ceremony of meeting Armen Sarkissian with Prokopis Pavlopoulos  and his wife Vlasia Pavlopoulos took place.  Armenian President Armen  Sarkissian and First Lady Nune Sarkissian welcomed the guests in  Yerevan.