MP: Nairi Hunanyan must disclose information about the terrorist  attack in parliament 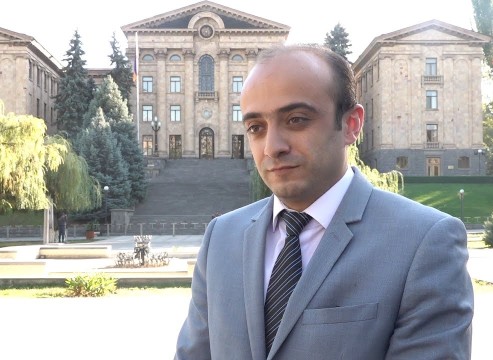 ArmInfo.Armenian society is not ready to see Nairi Hunanyan at large. On October 23, MP from the Bright Armenia party Taron Simonyan said this speaking about  Hunanyan's petition for parole.

Simonyan also noted that if Hunanyan has information on the events of  October 27, 1999, then he should publish it.  On October 27, 1999, a  group of terrorists burst into parliament and shot and killed  Prime  Minister of Armenia Vazgen Sargsyan,  Speaker of the National  Assembly of the Republic of Armenia, Karen Demirchyan,  Vice-Speakers  of Yuri Bakhshyan and Ruben Miroyan,  Minister of Operational Affairs  Leonard Petrosyan and MPs Armenak Armenakyan, Mikayel  Kotanyan,  Henrikh Abrahamyan.  The terrorist group included former journalist  Nairi Hunanyan, who worked for some time on television in Armenia,  his brother Karen Hunanyan, their uncle Vram Galstyan, as well as  Derenik Bejanyan and Ashot Knyazyan. Their trial began on February  15, 2001. On December 2, 2003, the Center-Nork-Marash trial court  sentenced the Nairi and Karen Hunanyan brothers, Edik Grigoryan, Vram  Galstyan (in 2004, according to the official version, committed  suicide), Derenik Bejanyan and Ashot Knyazyan to life conclusion.  Hamlet Stepanyan was sentenced to 14 years in prison (in May 2010,  his body was found in his bed at the Nubarashen detention center).  All seven were found guilty of treason and terrorism.  According to  the legislation of the Republic of Armenia, after 20 years of serving  a sentence, a person sentenced to life imprisonment can send such a  request. The relevant application for Nairi Hunanyan's early release  is pending.