Deputy: The Government intends to take concrete steps to introduce  the institution of total declaration of income from next year 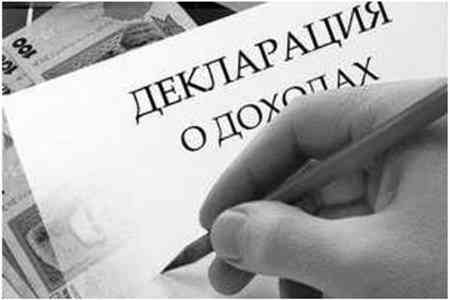 ArmInfo. Starting next year, the Armenian government intends to take concrete steps to  introduce the institution of total declaration of income.

Until the end of this year, according to him, a scheme of the  mechanisms of this system will be presented.  The government, as  Tunyan noted, wants to make a consistent transition to this  mechanism.

<Different opinions sound. We are told that the worst thing we can do  is to abandon the current income tax system. We say that we want to  change the mechanisms of this system, and not the system itself,> he  said.  The economist explained that the institution of total income  declaration provides for the payment of income tax from the amount  from which the expenses directed to priority areas determined by the  government, in particular, education, healthcare, etc.

<We are not reducing tax, but the tax base. This will give us the  opportunity to provide more targeted assistance. If this system is  implemented, it will allow us to add a number of other criteria and  solve social problems to a certain extent. For example, the number of  children, social living conditions, etc.> will be taken into  account,> the deputy said.

Recall that Prime Minister Nikol Pashinyan said that there is a need  to change the attitude towards the institution of paying taxes.  "Everyone demands an increase in pensions, allowances and wages,  level roads and the construction of new schools, but when it comes to  taxes that should provide state treasury income, where will the funds  for these purposes come from, everyone remains aloof," the prime  minister said .  Moreover, as Pashinyan pointed out, the declaration  does not yet mean taxation of these incomes. Today, he called for  considering the initiative as a new form of dialogue. Stressing that  only after a broad discussion of the issue will it be realized, Nikol  Pashinyan called on the Armenian public to be "openminded" (ed.  Without warning, open). "So do we want to be transparent, or do we  prefer to be transparent places?", Asked Pashinyan.

Earlier, ArmInfo reported that the State Revenue Committee of Armenia  intends to come up with a proposal for amendments to the Tax Code. If  amendments are accepted, identification cards (ID-cards) will also  serve as accumulative cards, they can be used in shopping centers. As  the head of the KGD David Ananyan stated in the video posted on the  government's Facebook page, special declarations will be prepared for  people with ID cards. "We will give out devices for" reading "cards  to everyone. Cash registers will determine the buyer, and when you  purchase something in the store, this goods will be registered as  purchased in QGD. At the same time, 3% of the sum of all purchases  during the year will be returned to the citizen, "Ananyan said.

At the same time, on November 7, 2018, in response to a question from  ArmInfo, the head of the State Revenue Committee stated that if a  citizen's expenses significantly exceed official income, then tax  officials may have questions regarding the sources of origin of these  funds. "The state has the right to ask to show also those incomes  that provided you with the opportunity to make such expenses," he  said.  According to Anyanan, as a person he understands the anxiety  of citizens who hide their real incomes, but do not understand them,  being a tax administrator.