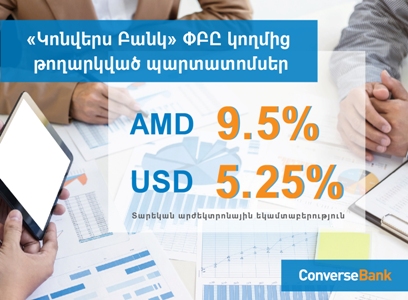 According to the source, the coupon yield on AMD bonds is 9.5% per  annum, and the  USD ones- 5.25% per annum. The maturity period for  the bonds of these two issues is 36 months. Coupon payments are to be  made every six months.

The bank said that the launch of the regular tranches is aimed at  ensuring the continued nature of the issue of bonds, thereby  providing customers with the opportunity to purchase them in both the  primary and secondary markets.

Thus, in 2019 Converse Bank is already implementing the second  placement of its bonds, in particular the previous issue dated April  15 this year with the completion of the initial offering on August 23  and listing on September 12 - these were AMD bonds for 1 billion AMD  and $ 10 million worth USD bonds.

More detailed information on new issues is available on the Converse  Bank website under the link:  https://conversebank.am/hy/2019issue/

It should be noted that Converse Bank has been operating in the  Armenian market since September 1996.  As of January 1, 2019, the  shareholders of the Bank are Advanced Global Investments LLc (led by  Eduardo Eurnekian) - 80.94%, HayPost Trust Management B.V. - 14.06%;  Cathedral of the Mother See of Etchmiadzin - 5%.