Forecast: Changes in global politics may affect security of Armenia  and Artsakh 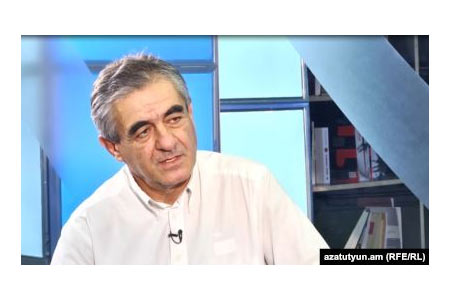 ArmInfo.In the current international situation, there is not a single opportunity even for a serious discussion about the settlement of the Artsakh conflict. A  similar opinion was expressed by ArmInfo Director of the Armenian  Center for National and Strategic Studies Manvel Sargsyan.

"The actions of the Turkish army in the north of Syria radically  changed the distribution of global interests.  And in an increasingly  inclined to apply NATO sanctions against Turkey, as a result, a  crisis arose.  Initiating such sanctions, the US President announced  that he absolutely does not care who will settle another Syrian  crisis. States are not going to fight with the Turks over the Kurds,  especially given the involvement of the Syrian army in this war, "he  said.

Thus, Donald Trump, according to the analyst, indirectly involves  Russia and China in this process. And Russian President Putin  immediately set to work, inviting his Turkish counterpart to Moscow.  According to Sargsyan, what is happening is yet another evidence of  the irreversibility of the process of "spreading" the previously  existing relations between allies and opponents. As a result, changes  are irreversible, both at the regional and global levels.

"The main question in all of this is what will happen when the Syrian  and Turkish army face each other?  Especially, given that Trump does  not see anything wrong with Russia's help to Syria. All these changes  can affect the security of Armenia and Artsakh. And the reasons for  there's enough concern, given the statements made by Erdogan and  Aliyev in Baku on October 15, "he stressed.

On October 14, Turkish President Recep Erdogan during the 7th  Cooperation Council of Turkic-speaking states in Baku voiced the  unacceptability of "being under the Armenian occupation of the  territories of Azerbaijan: Nagorno-Karabakh and neighboring areas,  which forced their residents to become refugees." He also expressed  readiness to "contribute to the restoration of the territorial  integrity of Azerbaijan." On the same day, at the same summit on  October 14, President Ilham Aliyev voiced claims on the territory of  Armenia. "Nakhchivan is separated from the mainland of Azerbaijan.  Zangezur, an ancient Azerbaijani land, is located between them. Its  transfer to Armenia created a geographical split in the Turkic  world," Aliyev said.

According to the analyst, immediately after that, the Azerbaijani  press began to promote the idea of "using Azerbaijan's precedent  created by Turkey in Syria for" anti-terrorist cleansing. "Moreover,  special attention was paid to assessing the possibility of supporting  such actions by Azerbaijan from the United States and Russia.

The latter circumstance, according to his estimates, is of extreme  interest. Especially considering that according to the Minister of  Defense Azerbaijan - "the international situation does not allow  starting a war against Nagorno-Karabakh." According to Sargsyan, Baku  is well aware that they can try to achieve their goals exclusively  under the "green light" of the superpowers, which, at the same time,  will also bind the hands of Armenia, as happened in April 2016.

"However, at the moment, nobody wants to give such a carte blanche to  Azerbaijan. This is confirmed by the statement made by the Secretary  General of the Alliance Jens Stoltenberg on the absence of a military  solution to the Karabakh conflict on October 14 at a meeting of the  NATO Parliamentary Assembly," the analyst summed up.