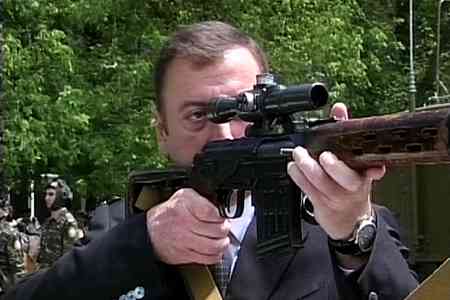 ArmInfo.The possible temptation of Azerbaijani President Ilham Aliyev to unleash another war will run into harsh geopolitical realities. A similar opinion was expressed by ArmInfo responsible "Hay-Dat" and political issues, member of the  Bureau of ARF "Dashnaktsutyun" Kiro Manoyan.

"It is clear that given his dictatorial habits, Aliyev may well have  the desire to attack Artsakh once again.  However, in my opinion, the  international community, especially after the Turkish invasion of  Syria, is very cautious in such matters. Accordingly, in this light  "The international reaction to such aggressive actions of Azerbaijan  will be quite predictable and tough," he said.

According to Manoyan, practically no one needs the fire of another  conflict today, since in this case, maintaining the geopolitical  balance in the region will become even more difficult. In this light,  according to his forecasts, any bellicose urge of Aliyev will  immediately come across restraining measures by the international  community, in particular, neighboring countries, including,  including, even Turkey itself.  Commenting on Russia's position  trying to maneuver between Yerevan and Baku, the politician noted  that Moscow has shown similar attempts traditionally and there is  nothing new in the statements, for example, Russian Foreign Minister  Sergei Lavrov, in this sense. According to him, the mistakes made  sometimes by Armenia's strategic ally are due to Moscow's desire to  maintain and strengthen its influence over Azerbaijan. Moreover, such  a balancing of relations between a country - a strategic ally and a  partner country, in Manoyan's view, is not obvious and logical.