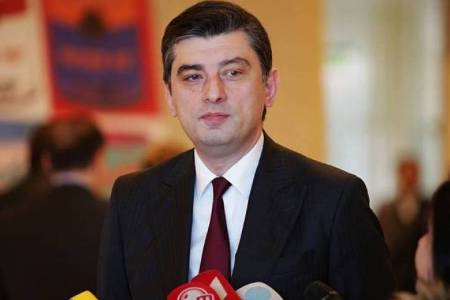 ArmInfo. "If I take an interest in the most important achievements of my premiership in 1.5 years, I'll be among the first to establish a new quality relationship  between Armenia and Georgia," said Prime Minister Nikol Pashinyan  during a personal meeting with his Georgian counterpart Giorgi  Gakharia.

According to Pashinyan, he is pleased to welcome in the Armenian  capital Yerevan " highly respected Mr.  Giorgi Gakharia " , as the  fraternal Georgian people Prime Minister. "I am glad that even before  a personal meeting we were able to establish warm working relations.  It is important to fix that from the first minute of our meeting, we  noted that today we will conduct negotiations at a sufficiently high  level, as a result of which relations between Armenia and Georgia  will improve." said Pashinyan.

The head of the Georgian Cabinet Giorgi Gakharia, in turn, said that  he was glad to be in Armenia on an official visit. "We take a large  degree of responsibility for our peoples," he said, pointing out the  historical friendship of Armenians and Georgians. He expressed  confidence that following the meeting it will be possible to declare  the establishment of deeper ties between Georgia and Armenia, which  will necessarily have a positive impact on the living standards of  citizens of the two countries. Pointing out that relations between  Georgia and Armenia are at a fairly high level, Gakharia noted the  potential for increased cooperation in the fields of economy, culture  and sports. "I think today's talks will have a positive impact on the  welfare of every citizen of Georgia and Armenia," he concluded.

It should be noted that Giorgi Gakharia was appointed Prime Minister  of Georgia on September 8. On October 9, Gakharia paid an official  visit to Azerbaijan. At a meeting with Aliyev, he expressed  confidence that there are no issues between Baku and Tbilisi that  cannot be resolved in a brotherly and friendly manner. He called it  not accidental that his first foreign visit was paid to Azerbaijan.  The prime minister stressed that this visit once again proves to  enemies and ill-wishers that there are no insoluble problems in  relations between the two countries. During the meeting, Aliyev and  Gakharia focused on discussing key areas of strategic partnership  between the two countries, important issues on the agenda of  bilateral cooperation and regional work on projects jointly  implemented by Azerbaijan and Georgia.