Military personnel who have been injured or disabled during military  service will be able to rely on a military pension, regardless of the  timing 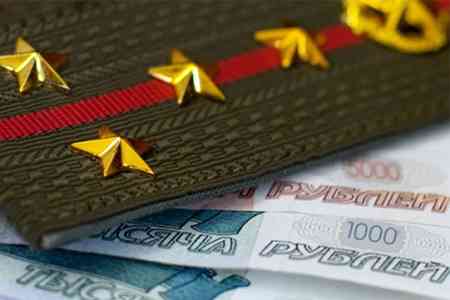 ArmInfo. Armenian servicemen who have been injured or disabled during military service during demobilization will be able to rely on a military pension, regardless  of the timing. Amendments to the Law "On State Pension" were approved  at a meeting of the RA Government on October 10.

Presenting the draft decision, RA Deputy Minister of Labor and Social  Affairs Gemafin Gasparyan noted that according to the current  regulation it is stipulated that servicemen can receive a military  pension within five years after the corresponding conclusion of the  military medical commission. However, as the Deputy Minister  emphasized, the RA Constitutional Court by its decision of July 12 of  this year found this provision unconstitutional. In this regard, an  amendment is introduced into the document, according to which the  concept of "five-year term" is removed. At the same time, Gasparyan  found it difficult to indicate the specific amount of the budget  allocation, since there is no data on the number of applicants.  In  turn, RA Minister of Defense David Tonoyan emphasized that this  proposal is a continuation of the policy of restoring social justice.  He emphasized that, for example, members of officers who died or were  injured while protecting the borders would be able to rely both on  state benefits in the amount of 60 thousand drams and on assistance  from the Military Insurance Fund in the amount of 240 thousand drams.   Moreover, we are talking about the average amount of payments, which  is due to the military rank of a serviceman, the length of service  and other parameters. The Minister recalled the decision taken on the  eve of the Board of Trustees of the Fund, which expanded the list of  military personnel. If earlier only families of soldiers who died or  were injured from January 1, 2017 could count on assistance, now this  period is postponed until January 1, 1998.

RA Prime Minister Nikol Pashinyan pointed out the importance of the  decision adopted by the Board of Trustees of the Fund, adding that  the RA government will take all necessary measures to ensure worthy  benefits for all military personnel from the moment Armenia gained  independence. "I urge you to have a little patience, because this is  a big and complicated work," the head of government said, adding that  this is the third initiative to expand the list of beneficiaries.

Recall that on the eve of the Defense Ministry of Armenia a meeting  of the Board of Trustees of the Military Insurance Fund, better known  as the "1000 AMD" fund, was held. As the press secretary of the RA  Ministry of Defense Artsrun Hovhannisyan said on his Facebook page,  during the meeting a decision was made to expand the network of  beneficiaries of the fund. "In particular, it was decided that from  January 1, 2020, within the framework of the compensation program,  families of military personnel who died or received a disability from  January 1, 1998 will be provided. Undoubtedly, this is an important  decision for thousands of families," wrote Hovhannisyan.