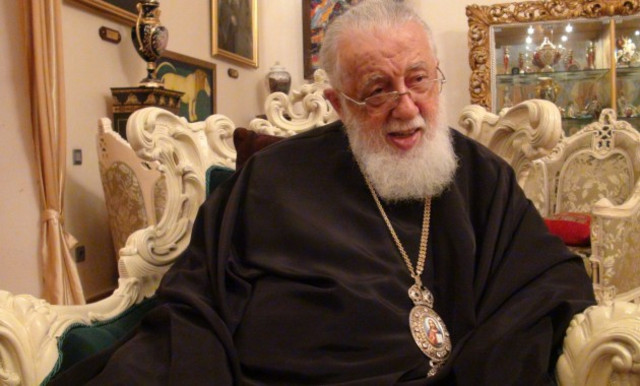 ArmInfo.Catholicos-Patriarch of All Georgia Ilia II addressed a letter to the  Prime Minister of Georgia George Gaharii in connection with the  situation that developed around the monastery complex David Gareji.

In a letter published by the Georgian Patriarchate of Elijah to  Gahariya, in particular, it says: "I greet you with respect and  address you about a very important issue in our opinion. The case  concerns two important monasteries - Udabno and Chichkhituri.  Everything is legally and cartographically. Between the leadership of  Georgia and On March 5-7, 1938 and June 13, 1996, the Azerbaijani  side reached a bilateral agreement, according to which the state  border should be drawn in accordance with a map on a scale of 1: 200  000, published in 1936-1939 by the People's Commissariat in According  to the bilaterally recognized map, the monasteries of Udabno and  Chichkhituri are recorded on the territory of Georgia (unlike  Bertubani, which is also an integral part of the Gareji, but ended up  on the territory of Azerbaijan), which is why, by Decree No. 315 of  the Government of the Republic of Georgia of April 21, 1991 the  liberated area of the landfill located on the territory of the Gareji  monastery landfill (where the monasteries), together with other land,  was transferred to the ownership of the Georgian patriarchate. In the  legal sense, this property was further approved on October 14, 2002  by the constitutional agreement concluded between the Georgian state  and the Georgian church in which we read: all the churches and  monasteries and the lands on which they are located are recognized as  the property of the church (7.1). Consequently, the actions of the  Azerbaijani side are completely incomprehensible to us, as a result  of which, since 2019, we have actually been deprived of the Udabno  and Chichkhituri monasteries and worshipers, tourists, as well as  clergy, have completely limited access to them. It turns out that  before the village, the existing reality this year, outside of any  logic, has been changed, with which we cannot reconcile. We demand  that before the completion of the delimitation and demarcation  process, the previously existing status quo was restored and that  there were no problems for clergy and tourists who came to get  acquainted with our culture in connection with the desire to visit  the monasteries of Udabno and Chichhituri, especially since  maintaining the actual situation in such territory binding, and  changing the situation without consent from another state, especially  through violent action, is completely unacceptable. We think that the  Azerbaijani people friendly to the Georgian people and the leadership  of their state will correctly assess the situation, so that there  would continue to be no alternative to good-neighborly and friendly  relations between our peoples. We hope, Mr. George, that through your  intervention the issue will be resolved positively and historical  justice backed by international standards will be restored. God bless  and strengthen you>.

The letter is dated October 1st. Copies were sent to the Ministers of  Foreign and Internal Affairs of Georgia, as well as to the State  Agency for Religious Affairs of Georgia.  Note that in the spring of  this year, a serious scandal erupted between Georgia and Azerbaijan  over the David Gareji complex. After the Georgian press reported with  reference to Archimandrite Kirion (Oniani) that the Azerbaijani  border guards began to establish signs prohibiting movement at the  Udabno monastery on the territory of the medieval Georgian cave  complex, and the access to the desert monastery was blocked by  Azerbaijanis for three days scandal broke out.

Recall that David Gareji is a unique complex of Georgian cave  monasteries, numbering about 20, carved into the rocks. The main  object of the complex is the Lavra of St. David. In many churches and  refectories on the territory of the complex, frescoes of the 8th-14th  centuries are preserved, including those depicting Queen Tamar. Part  of the David Gareji complex controlled by Azerbaijan, including the  Udabno Monastery, is located on the southwestern slope of the  semi-desert Gareji Ridge. The problem is that Baku considers David  Gareji a part of Albanian culture, not Georgian. Hence the ongoing  "war" between Azerbaijan and Georgia over the monasteries. Flared up  now, before Easter, the scandal seems to have been able to quickly  stop. A few hours after the appearance of information on the actions  of Azerbaijani border guards at the Georgian Foreign Ministry, they  stated that the problem was resolved and priests, flocks and tourists  would be conveniently let into the monastery. Georgian Foreign  Minister David Zalkaliani said that he personally spoke with his Baku  counterpart, after which the Azerbaijani authorities decided  accordingly.  In turn, the head of the presidential administration of  Georgia, Lasha Zhvania, said: "Such facts suggest that the issue of  delimiting the border between countries is very important. It is  necessary that, according to the existing agreement between the  presidents of Georgia and friendly Azerbaijan, the commission  temporarily resume work, so that borders between the two friendly  countries are finally established and there is no longer any place  for artificial tension>.

This position was supported in Baku. A spokeswoman for the  Azerbaijani Foreign Ministry, Leyla Abdullayeva, said that her  country was "ready to complete the delimitation process of the  Azerbaijani- Georgian border in the near future". At the same time,  she clarified that the Azerbaijani border guards laid walking paths  to David Gareji for several days, because of the work, the road  leading to the Udabno monastery was closed to tourists and pilgrims,  as well as to clergy. But if this is so, why didn't the Azerbaijani  border guards inform the cave complex ministers in advance about  this, which would avoid a scandal? There are questions to Tbilisi.  Archimandrite Kirion linked what is happening with recent statements  by Georgian President Salome Zurabishvili about the need to agree on  disputed sections of the border as soon as possible and complete the  delimitation process, although Georgian Catholicos Ilia II forbade  clergy to make political statements. The issue of the border was  raised during the visit of Zurabishvili to Baku in February 2019.

Note that a few days earlier, the Azerbaijani side announced the  opening of a new border post at David Gareji.