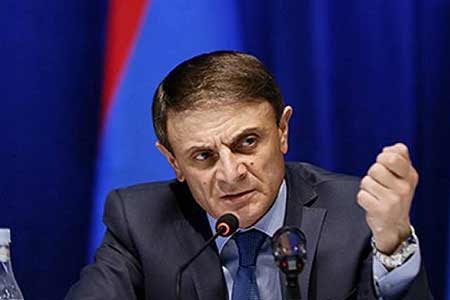 ArmInfo. By the decision of the  Prime Minister of the Republic of Armenia Nikol Pashinyan, Valery  Osipyan was relieved of the post of Chief Advisor to the Prime  Minister.  According to the information posted on the official  website of the Government of the Republic of Armenia, the decision  was made on the basis of part 10 of article 9 of the law "On Public  Service".

Earlier, on September 18, President Armen Sarkissian, at the  suggestion of the head of government, signed a decree releasing the  head of the Police Valery Osipyan from his post. On the same day in  the evening, Osipyan was appointed chief adviser to the Prime  Minister. As the head of the office of the Prime Minister of Armenia  Eduard Aghajanyan stated, the resignations of the heads of the NSS  and the Police were personally initiated by the Prime Minister of  Armenia, and they were given the opportunity to write a letter of  resignation. According to him, the activities of the former heads of  the NSS and the Police did not satisfy the Prime Minister. When asked  why Valery Osipyan was appointed chief adviser to the head of  government, the head of staff noted that it was possible that the  prime minister considered that the former chief police officer would  be useful in this status.

According to unconfirmed information, Osipyan initially opposed his  appointment to the post of chief adviser to the prime minister. He  refused to go to work due to which the personnel department of the  government apparatus, without the knowledge of Osipyan himself, sent  him on vacation. Yesterday, the vacation period expired, but Osipyan,  instead of returning to work, wrote a letter of resignation.

Valery Osipyan was appointed head of the police immediately after the  "velvet revolution" - May 10, 2018.  Prior to that, he served as  deputy chief of Yerevan police department. During the protests, he  and current Prime Minister of Armenia Nikol Pashinyan were on  opposite sides of the barricades. After coming to power, Pashinyan  opted for Osipyan, saying that this decision should be symbolic. The  head of government called it a sign of eradicating the " culture of  barbed wire " in Armenia.