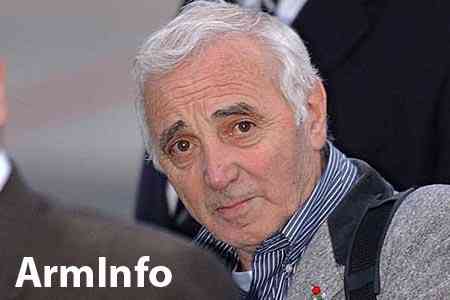 ArmInfo.Exactly one year has passed since the passing of the great French chansonnier of Armenian origin Charles Aznavour.

Chansonnier died on October 1, 2018 in Mouries at the 95th year of  his life. A farewell ceremony with the presidents of France and  Armenia was held on October 5 at the House of Disabled in Paris, the  funeral was held in the Armenian Church of St. John. He was buried in  a family crypt in the French commune of Montfort-l'Amoury in a suburb  of Paris.

In connection with the anniversary of the death, a statement was made  by the French Embassy in Armenia, which specifically states: "A year  ago today, Charles Aznavour left us. He is more than ever present in  the hearts of Armenians, French and his fans around the world. His  legacy will continue to inspire us, especially in the center of  Charles Aznavour Yerevan, which will include an interactive museum  and the future French Institute of Armenia will be located there,  thereby becoming the long-awaited French House of Culture in Armenia.  "

Charles Aznavour (real name Shahnur Vaginak Aznavuryan) was born on  May 22, 1924 in Paris, his parents are Armenian emigrants. Charles  studied at the children's art school, and later at the TSF Central  School (Paris). At the age of nine, Charles performed on stage, sang  and played, at the age of twelve he first appeared in films.  Initially, Aznavour performed in a duet with composer Pierre Roche.  After they were noticed by Edith Piaf, Aznavour and Roche took part  in her tour of France and the United States in 1946.  Since that  time, Charles began his professional career as a chansonnier. For a  long time he was unrequitedly in love with Piaf, she was his friend,  his muse and love. In the early 1960s, Aznavour was already quite  popular, he gave concerts in New York halls and, later, at the  company of Frank Sinatra released his first American album, writes  Calend.ru. During his creative career, Aznavour created more than a  thousand songs, many of which were sung with pleasure by such  world-famous performers as Ray Charles, Lisa Minelli, Bob Dylan,  Julio Iglesias. Aznavour performed in a duet with F. Sinatra, S.  Dion, L.Pavarotti, P.Domingo, P.Kaas, L.Minnelly, E.Segara and other  famous artists. According to a survey conducted by Time and CNN,  Charles Aznavour was the best performer of pop songs of the 20th  century.  On August 24, 2017, Aznavour received a star on the  Hollywood Walk of Fame in the category "Best Live Performance". His  star became the 2618th and is located next to the Pantages Theater,  where in October 2016, Aznavour gave a concert.