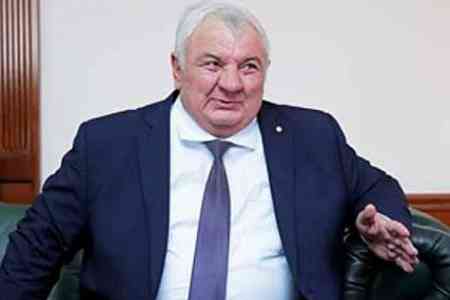 ArmInfo. By the decree of the  President of Armenia Armen Sarkissian, son of the former CSTO  Secretary General Yuri Khachaturov Grigori Khachaturov has been   bestowed with Major-General military rank.

In accordance with the law, the rank of general was awarded at the  proposal of Prime Minister Nikol Pashinyan, in connection with the  Independence Day of the republic.

<Based on the proposal of the Prime Minister, in accordance with  subsection 133 (2) of the Constitution, as well as subsection 16 (1),  paragraph 1 of the Law on Military Service and the Status of Military  Person.  Commander of the 3rd Army Corps, Colonel Grigori  Khachaturov, was  bestowed with the military rank of Major-General>,  the president's decree says.

It should be noted that Colonel Khachaturov on August 18  distinguished himself with competent leadership and the operation to  ensure the security of strategically important positions around the  village of Chinari in the Tavush region on the Armenian-Azerbaijani  border, thanks to which the Armenian Armed Forces managed to take  control and neutralize the shelling attempts from Azerbaijan by the  village of Chinari , the Armenian-Georgian gas pipeline and the  strategically important Armenian-Georgian highway.

To recall, former CSTO Secretary General Yuri Khachaturov is accused  of overthrowing the constitutional order in the case on March 1,  2008. At that time, he served as head of the Yerevan garrison. By a  court decision of July 28, he was arrested and then released on bail  in the amount of 5 million drams. In the same case was charged, the  2nd President of Armenia Robert Kocharyan, the former head of the  defense department of the Republic of Armenia Mikayel Harutyunyan  (who left the country and was put on the wanted list), the former  head of the General Staff Seyran Ohanyan and the former head of the  Security Council Armen Gevorgyan.