The mothers of the dead soldiers hold a protest outside the Armenian  government building, demanding the same compensation of 30 million  drams as the families of the victims of March 1, 2008. 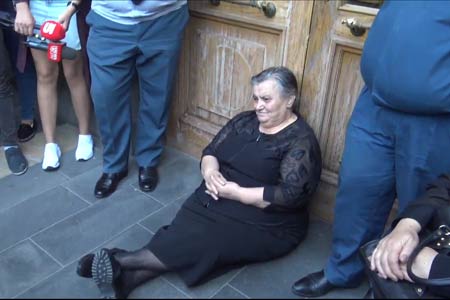 ArmInfo.The mothers of the deceased soldiers hold a protest in front of the government building demanding similar compensation to the families of those killed as a  result of the events of March 1, 2008.

It should be noted that earlier at a government meeting, a resolution  was adopted on financial assistance in the amount of 30 million drams  to the families of ten victims in the events of March 1-2, 2008.  In  parallel with the protest, the next meeting of the kambin takes place  in the government building. One of the mothers tried to infiltrate a  building for a meeting with the prime minister, but police officers  blocked her, blocking the entrance to the government building.

Margarita Khachatryan, one of the mothers of the dead servicemen, who  is the chairman of the "Soldier" coordination council, holds a  sitting picket at the main entrance to the Cabinet building, thereby  blocking the road there, threatening that if Nikol Pashinyan does not  accept her, he will continue a sit-in and a hunger strike at the  government building .