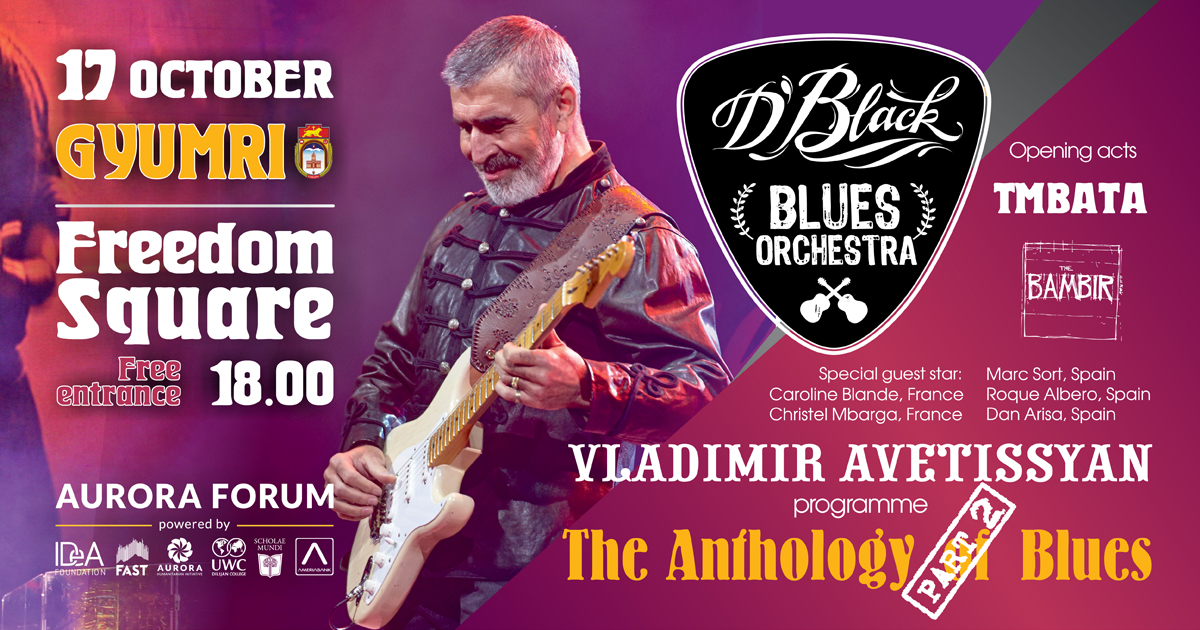 ArmInfo. On October 17, in Gyumri, on Freedom Square, a large open concert of the international blues band D'Black Blues Orchestra will take place. The speech will  be held within the framework of the Aurora Forum, which will bring  together leading world experts in the field of social, scientific,  technological, educational and humanitarian innovations and will be  the first such initiative in the region.

The leader of D'Black Blues Orchestra is a Russian musician,  businessman, philanthropist, founder of the EVITA charity foundation  Vladimir Avetisyan. The group includes musicians from Russia, the  USA, Spain and France. At a concert in Gyumri, D'Black Blues  Orchestra will present the program <Anthology of Blues. Part II>,  which includes bright works of world blues heritage. The concert  program will open with local bands The Bambir and TmbaTa. Tours  D'Black Blues Orchestra were held in the UK, China, Switzerland,  Spain, Ukraine, Moldova, Armenia, Georgia, the Baltic countries and  Scandinavia. During the D'Black Blues Orchestra tour in London, the  legendary Eric Clapton donated his autographed guitar to Vladimir  Avetisyan as a sign of respect and appreciation for the support of  Crossroads charity center.  The solo concert of the group on Nakhimov  Square in Sevastopol was attended by more than 20 thousand people. At  the premiere of the concert program D'Black Blues Orchestra <The  Anthology of Blues> in June 2017 on the square Republic in Yerevan  was attended by 60 thousand spectators.