Joachim Gauck: Armenia`s historical mission should be to build a real  democracy in this region 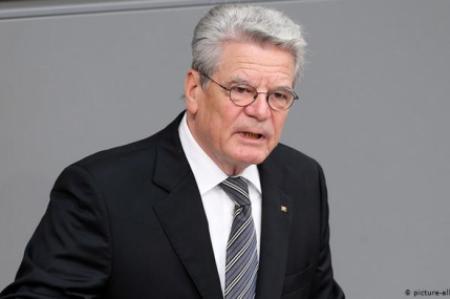 ArmInfo. Prime Minister of  Armenia Nikol Pashinyan met with former President of Germany Joachim  Gauck. As the press service of the executive body told ArmInfo,  Pashinyan at a meeting with Gauk noted that he sees him as a friend  of Armenia, and this is no coincidence, but due to his activities.

"We have recorded that your statement on the Armenian Genocide in  became the starting point as a result of which the German Bundestag  adopted a resolution on the recognition of the Genocide in the  Ottoman Empire," the Armenian Prime Minister said, also highlighting  the former German President's activity also in the human rights  field.

He also recalled the serious changes carried out in Armenia after the  "velvet revolution".  Touching on the relations between Armenia and  Germany, Pashinyan noted with satisfaction that they are developing  dynamically, and high-level visits have been made over the past year.  As a positive result, Pashinyan also indicated an increase in the  flow of tourists from Germany to Armenia, who are in second place in  terms of numbers after China in terms of the number of visitors. The  Prime Minister also expressed his conviction that after this visit,  relations between Armenia and Germany will improve even more.

In turn, Gauk expressed gratitude for the warm welcome: "It is extremely  important for us that the fact of the Armenian Genocide is deeply  perceived in German society. It is important to record the facts that  happened in the past. We admire the fact that fundamental changes are  taking place in Armenia aimed at building a legal state. " At the  same time, he expressed his conviction that the construction of real  democracy in this region should be the historical mission of Armenia.    At the same time, Gauk emphasized that the German government and the  European Union are closely following the changes in Armenia, adding  that the EU has the political will to help strengthen the rule of law  in the country.  During the meeting, the interlocutors exchanged  views on the Armenian-German relations and Armenia- EU cooperation.