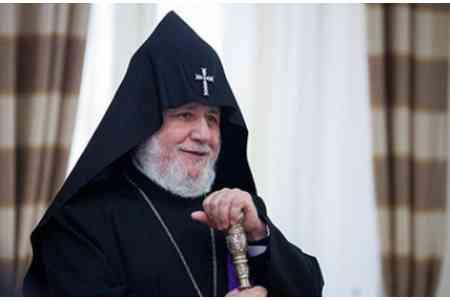 ArmInfo.In the Mother See of Echmiadzin, the participation of the Catholicos of All Armenians Karekin II in the second summit of World Religious Leaders in Baku  was ruled out.

Thus, head of the press office of the Mother See of Holy Etchmiadzin,  Priest Vahram Melikyan, in an interview with ArmInfo correspondent,  referring to Karekin II's non-participation in the summit, noted that  Sheikh ul-Islam had already explained in detail the reasons for not  participating.

Meanwhile, to clarify whether it is possible that Patriarch Kirill  will mediate in this matter and Karekin II will go to the summit,  Melikyan said in particular: "This issue has not been considered.   This is usually not done unilaterally. "

Earlier, chairman of the Caucasus Muslims Office, Allahshukur  Pashazade, did not send an invitation to the Catholicos of All  Armenians Karekin II to participate in events that will be held in  connection with the 70th birthday, the 40th anniversary of Sheikh  ul-Islam .

Pashazade informed that at the II summit of World Religious Leaders,  which will be held in November this year in Baku, more than 400  foreign guests are expected to participate, including about 50  eminent statesmen and religious figures of the world, representatives  of science and the public. "In this regard, under the leadership of  the chairman of the Organizing Committee, we carry out all necessary  measures and hold meetings. At the I Baku summit of world religious  leaders in 2010, the Armenian Catholicos was a member of the  Interreligious Council of the CIS.  As you know, I am co-chair of  this council with Patriarch Kirill. And at the suggestion of the  patriarch, we invited the Armenian Catholicos to Baku. Since there is  no such mediation in connection with the current II summit, the  invitation was not sent. "