Renovation of highway leading to Armenia launched in Georgia 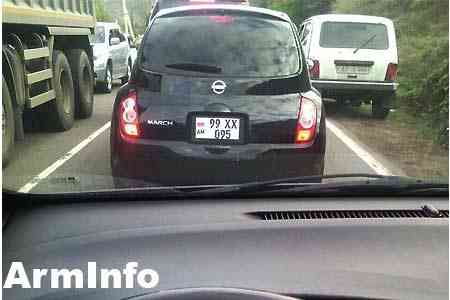 ArmInfo. In Georgia, work is eginning to renovate the highway leading to Armenia. In this regard, according to the press service of the State Revenue Committee (SRC)  of the Republic of Armenia, the traffic of cars with trailers and  semi-trailers through the Guguti (Georgia) -Gogavan (Armenia)  checkpoint will be limited.

The source, referring to the report of the State Revenue Service of  the Ministry of Finance of Georgia, notes that the restrictions are  associated with repair work beginning on August 19 on the section of  the Ponyachala-Marneuli-Guguti highway. The work will be completed by  the fall of this year. The project provides for the repair of an  85-98 kilometer section of the road.

To recall, in March of this year, Prime Minister Nikol Pashinyan  noted that millions of dollars were invested in the implementation of  the North-South highway construction project, and its impact on the  Armenian economy is zero. According to the Prime Minister, strategic  planning is important in this matter.  For example, there is still no  agreement with Georgia on the construction of the North-South road.  As an example, he pointed to the fact that a magnificent road was  built to the Gogavan checkpoint on the territory of Armenia, but  because of the poor roads in Georgia, no one uses it. And, on the  contrary, the road to Bagratashen checkpoint on the territory of  Armenia is in a terrible state, and in Georgia the road is  magnificent in this section. All this, as Nikol Pashinyan noted,  indicates the absence of a strategic planning system. Nikol Pashinyan  also emphasized that tender procedures are underway in Georgia for  the construction of the Ninotsminda (Georgia) - Bavra (Armenia) road,  which is currently in disastrous condition.

It was originally planned to complete construction of the corridor in  2019, however, now the deadlines are postponed for 5-10 years. Under  the North-South program, the Armenian government calculated the  preliminary savings of $ 2.5 per hour for each passenger and $ 1 per  hour for the transportation of a ton of cargo. As the Armenian  authorities expect, the program will allow the country to mitigate  the consequences of the blockade by Azerbaijan and Turkey in the  future, play the role of a transit state in the cargo transportation  of the countries of the region, as well as join the Black Sea ring  highway.