Uruguay Consulate General to be opened in Armenia this week 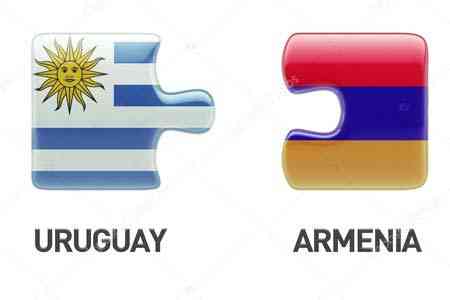 ArmInfo.The Consulate General of Uruguay will open in Armenia this week, Armenian Foreign Minister Zohrab Mnatsakanyan announced on August 14 at a joint press  conference with the Minister of Foreign Affairs of Uruguay Rodolfo  Nin Novoa, who is on an official visit to Yerevan.

According to him, this once again testifies to the high level of  relations that has developed between the two countries. "The visit of  my Uruguayan counterpart to Yerevan will complement the active  dynamics that have developed in our bilateral relations. Uruguay is  an important and reliable partner of the Republic of Armenia. It is a  country that recognized the Armenian Genocide in the Ottoman Empire  in 1965 and then again in 2004 reaffirmed its commitment to this  issue, "the RA Foreign Minister noted, adding about the common values  that the two countries adhere to from the human rights to the rule of  law.  At the same time, the Armenian minister stated that the two  countries are actively interacting on international platforms,  especially on the issue of preventing new crimes against humanity.  Mnatsakanyan also pointed out the important role of the Armenian  community, numbering about 20 thousand in Uruguay, in building and  strengthening bilateral relations.

At the same time, the Foreign Minister of Armenia announced Yerevan's  readiness to strengthen cooperation with Montevideo in all possible  directions, in this context, proposing to create a platform that  would strengthen cooperation between the two countries in tune with  the vector of development of the states.

Mnatsakanyan also informed that he told Novoa in detail about the  approaches and principles of Armenia to resolve the Nagorno-Karabakh  conflict, once again emphasizing the importance of ensuring the  safety of the people of Artsakh and the status of Nagorno-Karabakh  proceeding from this. He once again emphasized the importance that  the Armenian side attaches to the negotiation process and pointed out  that there is no alternative to a peaceful resolution of the problem.   In turn, the Foreign Minister of Uruguay also emphasized that his  country stands for peace and international security. "We support a  peaceful settlement of the conflict within the existing format on the  basis of the international format, established back in 1995 and  within the framework of the UN principles.  There is no alternative  to the peace process," the Uruguayan Foreign Minister said.  He also  recalled that Uruguay was the first to recognize the Armenian  Genocide as early as 1965, adding that in 2004 at the legislative  level  April 24 was declared as the Day of Remembrance of the Victims  of the tragedy faced by Armenia. According to him, the law obliges  the media on this day to broadcast those who want to talk on this  topic. In this regard, he spoke about the active role of the Armenian  community of Uruguay, which, not forgetting the historical homeland,  is also actively involved in the socio-political life of Uruguay.   Novoa also touched on relations between the two countries, and noted  that over the 27 years of establishing diplomatic relations, the  interaction between the two countries has become so strong that the  honorary consulate of Uruguay will open in Armenia this week. "The  opening of this diplomatic mission is an important evidence of the  permanent strengthening and deepening of our cooperation. We have a  number of areas in which we can interact. We are ready to share our  experience in the field of public services with Armenia. In addition,  I will meet with the Minister of Healthcare of the Republic of  Armenia, and we will present our successful experience in this  direction, "said the main diplomat of Uruguay, indicating the  existence of serious potential for cooperation in a number of areas.