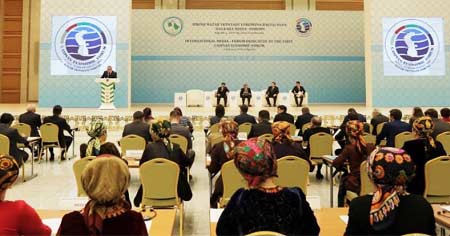 ArmInfo.Representatives of the Caspian counties gathering in the resort national tourist zone Avaza, located on the Caspian coast near the city of Trukmenbashi,   have initiated the implementation of a number of large-scale programs  for the development of comprehensive economic cooperation at the  First Caspian Economic Forum.

The forum brought together over 1,500 representatives from more than 40 countries of the world, one way or another connected by their economic interests with the large Caspian region - Russia, Iran, Kazakhstan, Turkmenistan and Azerbaijan. Last  year, having finally agreed on the global problem of the status of  the Caspian Sea (the Convention has not yet been ratified by Russia  and Iran - Ed. note), today they began to take full advantage of  their geopolitical, geostrategic, energy and transport provisions.

At the first plenary meeting of the Forum that took place today,  President of Turkmenistan Gurbanguly Berdimuhamedov spoke to the  representatives of official delegations of invited countries,  business and academic circles in the Great Hall of the Avaza Congress  Center. Speaking about the future of the Caspian, he noted that  Turkmenistan considers it in the context of the future of the whole  planet and correlates its work with the activities of the United  Nations in fulfilling the Sustainable Development Goals. , the head of  Turkmenistan emphasized.

In this regard, the head of state proposed initiating a multilateral  dialogue at the UN on integrated development of the Caspian region,  including based on the opinions and assessments that will be voiced  during the current Forum. The head of Turkmenistan noted that the  First Caspian Economic Forum should be considered in a format that  will become an effective mechanism for establishing strategic  dialogue and partnerships in the Caspian. Here, on its shores, for  centuries, a special, distinctive type of relationship between  peoples has developed, and bridges of civilizational communication  between East and West have been built. , the country's leader noted.

According to him, the Caspian Sea should be a space of cooperation,  development and prosperity, free from conflict and confrontation, a  place for combining the energy of states, international  organizations, business, scientific and technological potentials.  , the head of the  Turkmen state said.

He noted the four most important factors of the Caspian as a  geostrategic region. This is one of the world's largest hydrocarbon  sources, the most important transportation hub, directly entering the  orbit of the Great Silk Road, a major international trading hub, and  an excellent environmental recreational complex. Based on these main  factors inherent in the Caspian region, the Caspian countries and  their immediate neighbors need to develop a new format of cooperation  and partnership in the energy, industrial, transport, trade,  scientific and technological - innovative, environmental spheres with  the aim of achieving peace, security, stability and sustainable  development of a large region. Such, the leader of Turkmenistan  believes, are the main issues of the "Caspian agenda", free, as he  put it from politicization and unfair competition.

In this context, Gurbanguly Berdimuhamedov proposed the idea of  creating a large Caspian logistics center based on the port  capabilities of the city of Turkmenbashi (over 25 million tons of  cargo per year) and the National Merchant Fleet of Turkmenistan.  Another initiative of the Turkmen leader concerns the creation of an  international innovation and technology center (Caspian Innovation  Center) to develop models for the innovative development of the  Caspian region, to strengthen the scientific and technological  research base for large-scale programs, including projects for the  environmental protection of the Caspian Sea. As the Turkmen leader  noted, "Ecology cannot be held hostage to commercial and economic  benefits".

The first vice president of Iran, Eshaq Jahangiri, also spoke at the  forum, according to which Iran is ready to provide all its economic  and infrastructure potential for the development of cooperation in  the Caspian and Central Asian regions. He emphasized the advantages  provided by the customs agreement signed between his country and the  EAEU. Iran has all the necessary transport and logistics  infrastructure in order to ensure sustainable transport links between  the Caspian and the Persian Gulf. At the same time, the Iranian  politician noted that there are countries that by their behavior  today threaten stability in the region, destabilize it: "US  Iranophobia is contrary to the security of the region>.

Prime Minister of Kazakhstan Askar Mamin, in turn, drew attention to  the need to increase the efficiency of transport and logistics  services in the region, the maximum use of energy infrastructure  through the use of new knowledge and technologies in this area, where  Kazakhstan has the most advanced developments and what he is ready to  share with partners. Mamin expressed an interesting idea of  developing tourism in the Caspian region, creating and promoting a  new tourism brand "Tourism in the Caspian" on world markets.   According to him, this will be facilitated by the achievement of an  agreement on a visa-free regime for Central Asian countries and the  signing of an agreement on the so-called "Central Asian Schengen",  which is on the agenda today.

Dmitry Medvedev, head of the government of the Russian Federation,  emphasized the need to find effective mechanisms for business  cooperation between the countries of the region, including with third  countries in terms of improving transport corridors, logistics  centers, and port facilities. He announced the allocation of  substantial resources for the development of port infrastructures in  the Russian zone of the Caspian with a view to further developing the  Eurasian transport chain and the North-South corridor connecting the  Caspian with the northern regions of Russia along the Volga, where  about 60 million people live. Medvedev also noted the relevance of  scientific and technical cooperation between the states of the  region, technological exchange, joint activities to maintain the  ecological balance of the Caspian Sea, and create tourist clusters on  it.

Prime Minister of Azerbaijan Novruz Mammadov confined himself to  generalities about the importance of trade and economic cooperation  of the countries of the region, while emphasizing the importance of  building bridges not only across the shores of the Caspian Sea, but  also the stable routes connecting the Caspian with the Black Sea.

To note, the program of the First Caspian Economic Forum is very  varied. Within its framework, meetings of economic ministers of  invited countries, and not only of the Caspian region, meetings of  transport ministers, heads of energy departments, business  associations have already taken place. The ceremony of signing  various interstate bilateral and multilateral agreements took place.

The Armenian delegation was invited to the forum, but for some reason  it worked here within the framework of individual programs. The  members of the Armenian delegation, even if attended at any session  or panel discussion, unfortunately they did not speak. Such a limited  presence on international sites and unjustified "modesty" is not  worth a small part of the money spent from the budget on travel  expenses.