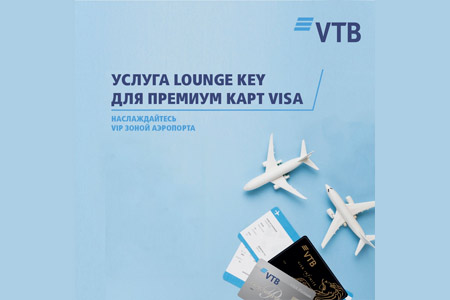 ArmInfo. VTB Bank (Armenia) offers all its customers - Visa Infinite and Visa Platinum cardholders, to use the Lounge Key service and enjoy the VIP zones of  550 airports in 300 cities of 100 countries of the world. As ArmInfo  was told in the press service of the bank, in order to get to the VIP  zone, it is enough to show the Visa Infinite / Visa Platinum card to  the employee of the VIP zone.

VTB Bank's Lounge Key service (Armenia) is intended for those Visa Infinite and Visa Platinum cardholders who travel frequently and spend a lot of time at  airports. If the flight is cancelled or delayed, there is a long  period of time between connecting flights, or if you just want to  relax before the flight in silence, the Lounge Key service is the  most convenient and comfortable one.

Premium cardholders of VTB Bank (Armenia) can use the following  number of free entrances to the VIP zone: 6 times annually for Visa  Infinite cardholders, 2 times a year with Visa Platinum cards.  The  Lounge Key service allows the client: to organize meetings with  business partners in conference rooms if the flight is delayed; work  at a computer with free access to the Internet in separate work areas  equipped with comfortable chairs and tables; take a shower after  receiving bathing accessories from the administrator; dine in a  pleasant, comfortable atmosphere on the territory of the business  lounge, without going to the restaurant.  Detailed information can be  obtained in the branches of VTB Bank (Armenia), on the official  website www.vtb.am and in the Contact Center of the Bank at 87-87.

According to the 19th issue of the analytical review "Armenian Banks  in the Card Business" prepared by  ArmInfo, VTB Bank (Armenia)  maintains leadership in the number of active Visa and MasterCard  cards, as well as in the volume of ATM transactions, occupying the  2nd position in total volume of plastic transactions and the number  of ATMs. As of April 1, 2019, the bank had 379.2 thousand cards, of  which 234.1 thousand MasterCard and 145.1 thousand Visa. The volume  of plastic transactions on Bank cards exceeded 278.3 billion drams by  the end of 2018, of which 253.3 billion drams were ATM transactions,  and 8.9 billion drams were Internet transactions. The number of ATMs  of VTB Bank (Armenia) as of April 1, 2019 is 170, of which 80 are  installed in the capital and 90 in the regions of Armenia. Of these  ATMs, 15 are equipped with a cash-in function. The bank has its own  processing, tied to the processing of VTB Group.

To note, VTB Bank (Armenia) CJSC became a member of VTB International  Financial Group in April 2004.  Currently, the second largest VTB  Bank PJSC in Russia owns 100% of the shares of VTB Bank (Armenia).  The Bank traditionally ranks among the leaders of the banking system  of the Republic of Armenia in terms of key indicators. In terms of  coverage of the branch network, VTB Bank (Armenia) maintains  leadership, both in terms of their total number and regional  divisions.