Artsrun Hovhannisyan: Azerbaijan should understand that it does not  have a monopoly on the use of force 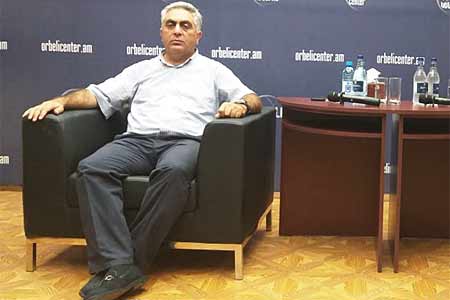 ArmInfo. The situation at the forefront of the past year and a half, not counting short-term exacerbations, is generally stable and calm. On July 23 in the center  of "Orbeli" on the discussions devoted to the Nagorno-Karabakh  conflict, said the press secretary of the Ministry of Defense of  Armenia Artsrun Hovhannisyan.

Therefore, he found it difficult to say what this lull is due to,  leaving it to the court of expert circles.  Nevertheless,  Hovhannisyan considered the trend to be positive, since it allows you  to devote more time to combat training.

"But parallel to the reduction of tension on the front line, we see  the intensification of combat training from the enemy or imitation of  this, which is manifested in an increase in the frequency of the  Azerbaijani- Turkish exercises and their magnitude," Hovhannisyan  said, focusing on the intensive armament of the Azerbaijani army and  aggressive rhetoric authorities of AR. Nevertheless, according to the  press secretary of the Defense Ministry, the aggression in the tone  of the Azerbaijani authorities has weakened somewhat lately.

Speaking about the Armenian army, Hovhannisyan stated that the Armed  Forces continue to arm and modernize. <The process of purchasing  modern Russian fighters continues. In addition, as the Armenian  Minister of Defense stated yesterday, surprises are expected in the  procurement process. The best method of preserving peace, increasing  the combat readiness of our own armed forces, "said the  representative of the Armenian Defense Ministry.

At the same time, he agreed with the opinion that Armenia cannot  shoot with one hand and negotiate with the other. <But no one can  talk to us in the language of blackmail. It is necessary to  understand - either we are negotiating or shooting. We can also  shoot, even better than the enemy. In Azerbaijan, they should  understand that they are not monopolists of force rhetoric, "he said.   Referring to the bill adopted by the US House of Representatives to  ban the sale of weapons to Azerbaijan, which can be used against the  civilian forces of Artsakh, Hovhannisyan stressed that Armenia only  welcomes such initiatives. "It would be good if such laws were passed  in all countries of the world," he concluded.