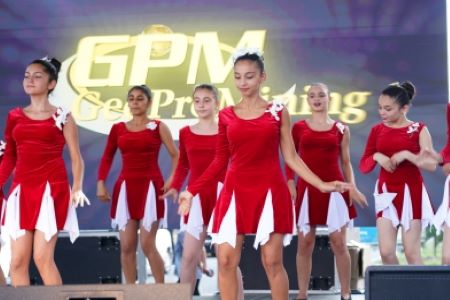 ArmInfo. International mining group GeoProMining (GPM) on July 19-20 in the towns of its presence - in Ararat and Vardenis, organized a number of events dedicated to the  Day of Miner and Metallurgist.

About 200 employees of the company and labor veterans received  letters of appreciation and cash rewards.  The best employees were  awarded the Medal of the Union of Miners and Metallurgists.

GeoProMining President Roman Khudoliy made welcoming remarks to the  staff and residents of the Ararat city. "Over the years of the  company's operation in Armenia, Miner's and Metallurgist's Day has  become a popular professional holiday for thousands of people who are  faithful to their profession and  hard work, who respect and create  good traditions, create their future and the future of their country.  Happy holiday dear colleagues and friends! May good luck accompany  you at work and at home!'', he said.

In an interview with journalists, the head of GPM stressed that in  the context of the last 5 years, the company shows good performance,  ensuring annual production growth of 20%.

Answering the question of ArmInfo, the GPM President noted that the  social programs are quite extensive, multi-staged and designed for a  long time. In this regard, he said that at this stage, the company  carries out work on the gasification and heating of the school in the  Ararat region. In particular, according to Khudoliy, over the past 10  years, the GeoProMining group of companies has invested about $ 8.5  million to implement social programs in the regions of Armenia.  In  turn, the governor of the Ararat region Garik Sargsyan,  congratulating all those present on their professional holiday, noted  that the company had made large investments in Ararat and Gegharkunik  regions since 2008, which exceeded up to $ 500 million. ''Today we  have people with high income fee.  Thus, significant social problems  are solved in the Ararat region. In parallel with this, the company  carries out social programs, in particular in the field of road  construction, carries out overhaul of kindergartens, provides them  with heating, etc.'', he added.  At the same time, Sargsyan noted  that after solving the problems associated with ensuring good  conditions for the education of children, which is a priority for the  regional administration, in the future the funds will be allocated to  the implementation of infrastructure programs.  It should be noted  that during the event there was a premiere of the film "Stone Lords",  which is dedicated to the miners - people of the courageous  profession. The company also presented a video report on social  events implemented in Armenia over the past 5 years.  The event ended  with a festive concert with the participation of popular pop stars  and television show artists.  To recall, the Armenian portfolio of  GeoProMining Group's assets includes the Agarak Copper- Molybdenum  Combine and JPM Gold (Sotk Mine and Ararat Gold Recovery Plant). In  general, over 12 years of work in Armenia, GeoProMining investments  exceeded $ 505 million. More than 2500 people work at Armenian  enterprises of  GeoProMining.