Head of Ministry of Healthcare believes that Lake Sevan is gradually  self-cleaning; experts do not think so 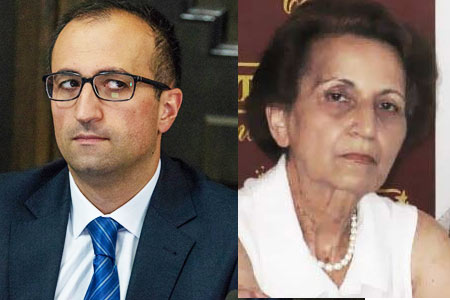 According to Torosyan, this observation is based on the study of  water samples taken from 11 different parts of Lake Sevan. "In the  2nd while there are insignificant deviations from the norm, but they  will also come back to normal in the coming days, because our study  recorded the dynamics of self-purification," he wrote.

According to the minister, the research will be of a long-term  nature, they will be announced later.

To recall, yesterday Employees of the tourist units of Lake Sevan  began to protest, blocking the Yerevan-Sevan highway and part of the  roads leading to the village of Gagarin, bypassing the lake. The  protesters demand that the Ministry of Healthcare and the members of  the government issue an official denial of information that swimming  in Lake Sevan is unsafe for health.  To recall, a few days ago, the  Ministry of Healthcare of Armenia issued a statement in which it  asked citizens not to swim in places where water pollution by  blue-green algae was observed, listing the symptoms that people may  have after swimming in such water.

Meanwhile, according to Knarik Hovhannisyan, a well-known ecologist  in Armenia, an expert in water resources, this is not about the  so-called "waterlogging" of Sevan, but about the lake's  eutrophication process. The first signs of a similar Sevan  occurred in the19 40s and196 60s of the last century.  The causes of  Sevan eutrophication lie in the increase in the lake water  temperature, as a result of which the deep layer is reduced,  which leads to a change in the habitual biodiversity. This process is  also promoted by sewage from the entire drainage basin, which  contains, in addition to municipal wastewater, household waste,  fertilizers, pesticides, etc., that are washed away from irrigated  lands, also contributes to this process. In this sense, according to  the expert, the work of only three treatment facilities, which  perform only mechanical water treatment, is completely inadequate.

A very important and dangerous factor for the lake eftrophication is  the small hydroelectric power stations built on the rivers flowing  into the lake, which often take water from the rivers above the  allowed limit, thus not providing the necessary amount of  environmental protection. Often, these structures lack the so- called  "fish walkers" necessary for spawning fish. As a result of all this,  according to the ecologist, in recent years there has been a  disappearance of the cancer population in the lake and some species  of fish, which are natural nurses of Sevan.

Not a small " input" to the lake pollution is brought by several  hundred tourist facilities around the perimeter of the lake, which  practically do not have sewage treatment plants and wash their drains  directly into the lake. There are also several dozen fish farms that  artificially grow trout, which use feed of unknown composition -  antibiotics, preservatives, dyes, etc.

As a result, these processes led to the fact that the coastal strip  of the lake became unsuitable for recreational use, as well as for  irrigation purposes. These factors contribute to the disturbance of  the nitrogen-phosphorus balance, which leads to lake eutrophication.

According to Hovhannisyan, it is urgent to stop the flow of sewage  into the lake without their prior biological treatment, to force  hydropower plants to begin work in the framework of approved projects  and contracts without violating environmental protection  requirements, and prohibit artificial fish farming in the lake. "We  are already witnessing the global warming of the climate and  recklessly adding to this the anthropogenic impact on the aquatic  ecosystem of the pearls of Armenia," summarized Knarik Hovhannisyan.