Expert: To resolve the issue with the Agarak Copper-Molybdenum  Combine, there is a need to establish a tripartite commission 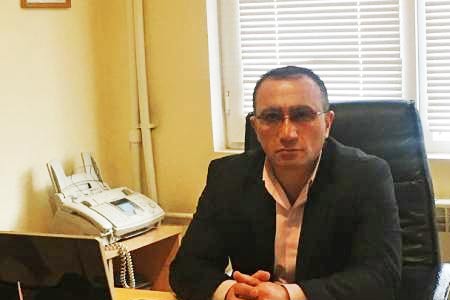 ArmInfo. The primary task for  resolving the issue with the strike of the employees of the Agarak  Copper-Molybdenum Combine (ACMC) is the creation of a tripartite  commission, which will include representatives of the government, the  company's management and the trade union. On July 12 at a press  conference chairman of Branch Union of Trade Union Organizations of  Miners, Metallurgists and Jewellers of Republic of Armenia Eduard  Pahlevanyan expressed this opinion.

"Since July 2, the spontaneous action of employees of the Agarak  Copper-Molybdenum Combine has led to the suspension of the plant as a  whole. The strikers are in favor of protecting their rights in terms  of paying wages for especially dangerous or especially harmful  conditions. Employees believe that wages were paid improperly or not  paid at all, "he recalled.  According to the head of the Union, a  trilateral approach in finding a consensus, perhaps at this stage  will give an active solution to this problem, but not a final one.  "We believe that this will be a constructive step, but it is not  exhaustive," he stressed.

Answering the question of ArmInfo, Pahlevanyan noted that the  employer had offered his own solution to the problem with the  condition that the workers take up their job duties. Until next  Wednesday, he said, labor personnel should announce their decision  whether they agree with the proposed conditions of employers. "I'm  sure that if there are government representatives on the commission,  the issue will be resolved efficiently. In particular, their  participation inspires some confidence for the workers that their  concerns will be really studied and considered," he said, adding that  the commission would immediately start to work, when will receive the  consent of employees of the plant on the conditions voiced by  employers. At the same time, Pahlevanyan did not want to assess what  would happen if the workers did not give their consent to the  conditions proposed by the tripartite commission.

Pakhlevanyan described the current problem as extremely serious, both  for the industry and for the residents of Agarak and the republic as  a whole.  "When all the staff members stood up, this suggests that  there is a need for a serious approach to addressing the issue, since  stopping any large enterprise in the mining industry is, to put it  mildly, an undesirable step in terms of the development of the  republic," he said, noting, referring on the words of employers that  one day of plant downtime in total causes damage in the amount of $  100 thousand.

The copper-molybdenum plant itself, according to the head of the  Union, is a city-forming one, since the majority of the able-bodied  population of Agarak works at this enterprise. "Therefore, the launch  of the enterprise is extremely important," he concluded.

To recall, on July 10 GeoProMining Company applied to the Armenian  government to create a multilateral commission from the competent  authorities to resolve the situation at the Agarak Copper-Molybdenum  Combine.  The statement noted, that the work of the plant was  suspended from July 3 this year due to the non-hiring of employees of  the technological transport department, which resulted in the  paralysis of production. The fact is that the employees of the plant  that violated the labor contracts presented unreasonable demands for  the payment of additional funds not provided for by bilateral  contracts.  Due to the halt of production of the plant, the local  community and state budgets of Armenia incur significant material  losses.  The leadership of the Agarak plant also calls on the MPs of  the Armenian parliament to refrain from emotional and baseless  accusations against the company and reports that the plant fulfills  all obligations to the staff, local budget and state budget of  Armenia in full and with its obligations and legislation of the  Republic of Armenia. In particular, the plant fulfills its  obligations in terms of wages, overtime payments and additional cash  rewards. The plant never had wage arrears and always fulfilled its  obligations stipulated by the employment contract and the RA  legislation.  GeoProMining, being one of the largest investors in the  Armenian economy, calls on state bodies to form a multilateral  commission from the competent government bodies in order to  objectively study the current situation and find ways to resolve it.

To note, the Agarak Copper-Molybdenum Combine (ACMC )is included in  the asset portfolio of the GeoProMining diversified  international group of mining companies. The plant is located in the  south of Armenia, on the border with Iran, and is the largest  industrial facility in the Meghri region. Since 2007, the Company has  invested $ 79 million in investments in the development of ACMC.   Currently 1040 people work at the Agarak plant. The average salary of  workers and engineering staff (excluding management) is 340,000 drams  (more than 700 US dollars).  From 2008 to 2018, the "Agarak  Copper-Molybdenum Combine" CJSC paid taxes and fees in the amount of  $ 121.9 million to the state budget of the Republic of Armenia,  including payments for VAT. In 2019, ACMC planned to pay to the RA  budget about $ 12 million, including VAT payments.  According to the  results of activity, the GeoProMining company, according to official  data, has invested over $ 505 million in the Armenian economy over a  10-year period.