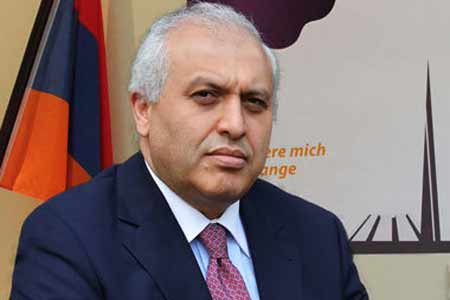 He recalled that Armenia signed the Comprehensive and Enhanced  Partnership Agreement  with the European Union, which has already  been ratified by a number of EU member states, including Germany.  "For us, this is a very important document, as in implementing  large-scale reforms in the country, in-depth and expanded cooperation  with the EU is expected," said Smbatyan, and in this context reminded  that Armenia is also a member of the Eurasian Economic Union and has  close relations with Russia.

"We want to preserve this exceptional military partnership with  Russia. From this point of view, Armenia may become a kind of bridge  between the EU and the EAEU. We also have close relations with the  United States since Armenia's independence, where a large number of  our compatriots also live. Good relations with China "Armenia is the  only country that, being a member of the CSTO, also cooperates with  NATO," the Armenian Ambassador to Germany added. Speaking about  relations with Germany, the diplomat reminded that official Berlin  was among the first in 1991 to establish diplomatic relations with  Armenia.  "Bilateral relations are dynamically developing and  expanding. We have a substantive political agenda, and high-level  visits contributed to the development of political dialogue,"  Smbatyan said.

At the same time, he stressed that Germany is the largest economic  partner of Armenia among the EU member states, and the third  strongest trading partner in the world. At the same time, he  expressed the conviction that there is a serious potential for the  further development of economic cooperation, which will be useful for  both countries.