RA Prime Minister: Pensions will increase by 10% in Armenia starting  from January 1, 2020 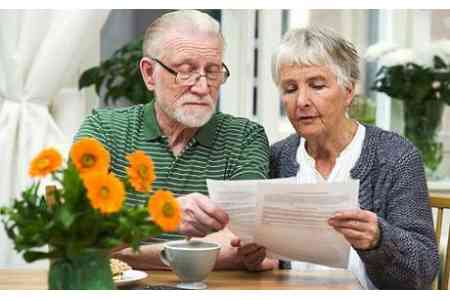 ArmInfo.From January 1, 2020,  pensions will increase by 10% in Armenia. The Prime Minister of the  Republic of Armenia Nikol Pashinyan said this at a government meeting  on July 11.

According to him, this issue was discussed at a closed emergency  meeting of the government yesterday, at which the mid-term  expenditure program for 2020-2022 was approved. The Prime Minister  recalled that since September of this year teachers' salaries will  also increase by 10%. From June 1, members of the armed forces of  Armenia already receive higher salaries.

The government of the country, Nikol Pashinyan continued, intends to  solve the housing problem of people who lost their houses in the 1988  Spitak earthquake. 3 billion drams will be allocated for these  purposes.  The methodology for determining the list of beneficiaries  of this program will be approved a little later.  In general, as the  Prime Minister noted, the main task of the government should be to  ensure high rates of economic growth. For these purposes, he  continued, it is necessary to develop a roadmap, the main directions  of which should be the development of the processing industry,  especially enterprises producing the final product, enterprises of  high-tech industry, and tourism.

Following the visits to Vietnam and Singapore, the head of government  ordered the Minister of Economy of the Republic of Armenia Tigran  Khachatryan to hold until August 20 discussions with enterprises of  the processing industry, and on August 20, discuss areas of  assistance to Armenian producers in order to organize the export of  Armenian products to these markets.