David Ananyan: No one can be deprived of property without court  decision 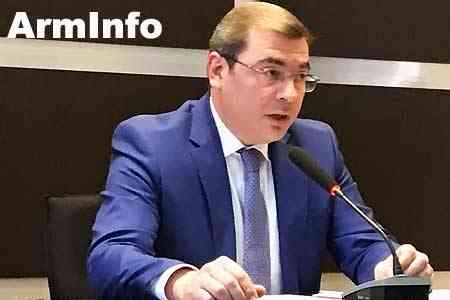 ArmInfo. David Ananyan: No one can be deprived of his property without court decision. This principle will be preserved. This was announced by David Ananyan, Chairman of the State Revenue Committee (SRC) of Armenia, at a press conference  on July 9, referring to the draft law "On confiscation of illegally  acquired property" and possible consequences for the "potential  beneficiaries" of the document.

According to Ananyan, there can not  be such that the state authority could take away the property  belonging to the person, in compensation for damage caused to the  state. "Simply, there are procedures that are regulated in accordance  with international experience and do not require a decision on this  property, nor do they require addressing the fate of this property  within the framework of bringing this person to criminal  responsibility. But the public should know that it is prohibited and  it's impossible to accept legal an act that can deprive a person of  ownership without a court decision, " David Ananyan explained.

Earlier, on June 13, Deputy Justice Minister Anna Vardapetyan stated  in an interview with journalists that the draft law "On confiscation  of illegally acquired property" developed by the working group formed  by the decision of the Prime Minister of Armenia, will also answer  the question of what fate awaits illegally acquired property of  judges. According to her, the bill was sent to international expert  organizations to verify its compliance with international standards.  After its approval by international experts, it is planned that the  document will go through a process of public discussion.