Wojciech Goretski: If Moscow could control April the war to the end, in Karabakh would have stood the Russian peacekeepers 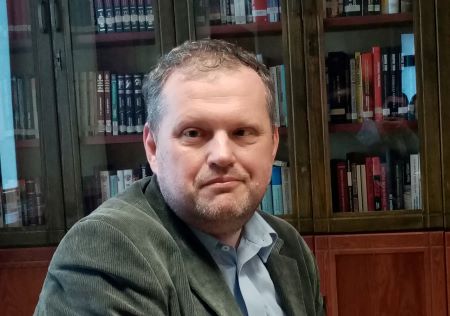 ArmInfo. Chief Specialist of the Department of Turkey, the Caucasus and Central Asia "Center for Eastern researches "(Warsaw) Wojciech Goretsky in an interview with ArmInfo shares a vision of the situation in the South Caucasus, comments on Armenia’s European perspectives. Analyzes geopolitics in the South Caucasus, main interests outside regional players, reasons and interprets its own version of the causes and consequences of the April 2016 escalation. Predicts possible scenarios situations around Artsakh in the future.

- What, in your opinion, would Europeans like to see the South Caucasus of the future, which Caucasus corresponds to the interests of the European Union?

-First, we would very much like to see the Caucasus stable, given the relatively short distance separating the region from the borders of the EU. It is in our interests to see the region prosperous, democratic and, accordingly, stable. Since all this is directly interconnected - democratic systems are more stable, which has already been proved by time. Of course, we are interested in developing economic ties with the countries of the Caucasus, developing ties at the level of our societies. Europe in general and Poland, in particular, strive to see your region like this.

- What do you think, does the expected abolition of the visa regime with Armenia open up new prospects in bringing our country closer to Europe?

- Without a doubt, this is important. Liberalization of the visa regime for Armenia has already happened. And I very much hope that the dialogue between Armenia and the European Union towards the abolition of the visa regime will be crowned with success. In my opinion, such a perspective is quite real. This is the next step towards the European integration of Armenia. And the example of Georgia and Ukraine demonstrates a direct relationship between the abolition of the visa regime and an increase in the human flow towards Europe. I would like to draw your attention to the fact that even today, under the conditions of a visa regime, many young people from Armenia come to Europe in the framework of projects and programs of all sorts. It is young people who have always been and continue to play the role of a kind of transitory of everything new: phenomena, trends and programs. Free entry to Europe from Armenia is a factor that, of course, brings us together. Accordingly, the forthcoming abolition of the visa regime will be of considerable importance in the development of relations between Armenia and the EU countries.

-You think that an increase in the number of Armenian citizens freely visiting Europe will be projected over time onto the Armenian state policy in relations with the European Union. Do I understand you correctly?

- It really is. Although I would like to recall that the existing Armenia-EU partnership agreement - EU-Armenia Comprehensive and Enhanced Partnership Agreement (CEPA) was signed at the end of 2017 by the government of Serzh Sargsyan. Thus, it is possible to ascertain the preservation of European tendencies after the change of power in Armenia. It is clear that Armenia’s membership in the Eurasian Economic Union excludes a free trade zone with the European Union for the republic. Economically it is simply impossible. However, the political part, other elements of CEPA work quite successfully today and will work even better in the future. Politics is the art of the possible and the science of the relative. Accordingly, within the existing frameworks, Armenia and the EU should try to achieve greater convergence at least at the political level. In my opinion, there are opportunities for closer convergence. To achieve this goal, you must at least use CEPA to the maximum.

-In what direction do you see the greatest threat to the interests of the European Union in the South Caucasus?

-The main threat is the destabilization of the region. Today, several external players are taking part in the escalation in the Middle East, including Russia, Iran and Turkey. The same three states are present in the South Caucasus, which does not automatically preclude a repetition of the Middle East scenario in your region. However, today I do not see the prerequisites for large-scale destabilization of the situation in the South Caucasus. Thus, the main threat to the EU in the Caucasus is the destabilization of this region as well. We are also concerned about migration flows through the South Caucasus. Moreover, we do not consider migrants directly from the Caucasian countries to be a threat. The collapse of statehood in the countries of the region is today an extremely unbelievable scenario, but it also poses a great threat to Europe. Europe is interested in democratic, stable countries of the Caucasus.

- “Velvet” revolution in Armenia, at first glance, demonstrates the commitment of Armenia to the democratic way and values:

-We look at all the latest processes in Armenia with great hope. On the other hand, while respecting the geopolitical choice of Armenia in favor of Russia, Europe is in favor of closer cooperation with Armenia. We understand and understand the reasons for the presence of Armenia in the EAEU and somehow do not want to prevent this presence. To drag out Armenia and, in general, someone in the European Union, contrary to the will, is in no way our goal.

-Do you consider Georgia as a successful example of the implementation of the DCFTA and AA contracts?

- In general, of course, yes. In the end, the change of power in Georgia and the coming to power in the republic of the "Georgian Dream" in October 2012 took place in a democratic way. Nevertheless, we are concerned about the last, last year’s presidential elections in Georgia. According to international observers, an administrative resource was involved in these elections on a large scale. Redemption by the state of the credit indebtedness of a part of citizens in general can be perceived as bribing voters. However, so far, in general, we regard Georgia as a successful example of the implementation of agreements with the EU. In this light, the next parliamentary elections scheduled for 2020 in this country are very important, although some in Georgia are expecting early elections this fall.

-I would like to hear your assessment as an expert in the Caucasus for 30 years, the reasons for the April 2016 war. In particular, who, in your opinion, was the winner as a result of the four-day escalation around Artsakh, considering that both Armenia and Azerbaijan were the losers?

-It all depends on the framework within which to consider these tragic events.

-In the widest, clearly, only Russia was the winner. Because only Moscow once again was able to force the conflicting parties to sit at the negotiating table and complete the escalation in a matter of hours. The rest of the intermediary countries, the co-chair countries of the Minsk Group, could not do this. Thus, following the April escalation, it was Russia that significantly strengthened its own positions and moderation in the Karabakh conflict. At the same time, it is important that Russia has its limitations in the situation around the conflict. In particular, Moscow cannot send its military to Karabakh, even under the guise of a peacekeeping contingent. We also remember very well the not very cordial welcome of Russian Foreign Minister Sergey Lavrov in Yerevan, which had objective reasons. Another profit of Moscow is forced, but support for its actions towards ending the April escalation in Karabakh by Western partners, in particular, the rest of the co-chair countries of the United States and France.

- In other words, it can be stated that the next, of course, locally controlled war around Karabakh is capable of bringing preferences except Moscow?

“It seems to me that a new war today is not needed even by Russia, given its limited resources. Russia already has a military presence in Syria and Ukraine and even a small clash around Karabakh does not need Moscow. At the same time, every local war always has the potential to grow into more global conflicts, which no one can control. Let us not forget that Russia did not manage to control even the course of the April escalation around Karabakh to the end it wanted. Otherwise, I do not exclude that Moscow would have managed to end the four-day war by sending its own peacekeepers to Karabakh. Thus, the risk of getting the conflict out of control is very high and you have to be very, very careful with that. I am sure that in Moscow everyone understands this perfectly.