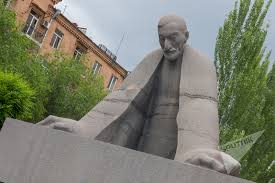 ArmInfo.The destruction of cultural  property in own country is equivalent to the betrayal of the nation.  Such a statement was made by descendant of architect-author of the  general plan of the modern Armenian capital Alexander Tamanyan    Gagik Tamanyan, who arrived from London to Yerevan.

Speaking at a meeting with journalists at <Noyan Tapan>, he said that  he had great hopes on the issue with the new leadership of the  country and asked Armenian Prime Minister Nikol Pashinyan to decide  on the resumption of the museum's activities, his grandfather.

To recall,, from 2004 to 2016, repeated attempts were made to close  the museum of Alexander Tamanyan, merging it with the national  museum, which we managed to do in 2016.

As Gagik Tamanyan noted, while he was in Yerevan, he met with  journalists, architects, also appealed to the mayor's office to  organize a meeting with the mayor Hayk Marutyan, but the municipality  replied that they would notify the mayor on this issue and if the  head of the capital deems necessary, will accept him.

In addition, Tamanyan said that he hopes to meet with Pashinyan and  his wife Anna Hakobyan on the result of which, expects the prime  minister to take a positive conclusion on this issue, which will be  the first step in reviving the museum, stressing that there are more  than 1000 in the personal archive of Tamanyan exhibits.

Returning to the events that took place in 2016, in particular, to  the ambiguous decision of the Ministry of Urban Development of  Armenia to merge two museums - Tamanyan and architecture, with the  goal of optimizing, the architect's grandson told about a meeting  with the then mayor of the capital Taron Margaryan. <Margaryan  promised me that he would do everything to resolve this issue if I  brought him the relevant government decree. I wondered how I could do  this. That is, he deliberately deceived me, " Tamanyan said.

In turn, the well-known journalist Mark Grigoryan, who was present at  the meeting, called the incident a grave mistake that needs to be  corrected. <Absurd situation. There is not a single person inside and  outside the government who would be against this idea, all parties  are in favor of this proposal, but the matter is not moving forward.  The reality is that "the cobbler's children have no shoes", so the  great architect had no place in his own city, "he concluded.  Alexander Tamanyan is the author of the master plan for Yerevan. In  1914, Tamanyan was awarded the title of academician. In 1923 he moved  to Yerevan, where he headed the large-scale construction that began  in the republic. Tamanyan is the author of not only the general plan  of modern Yerevan (1924), but also magnificent buildings in Yerevan,  St. Petersburg and Moscow. Among his creations are the central square  of Yerevan with the Government House, the Opera and Ballet Theater.   Spendiarova.