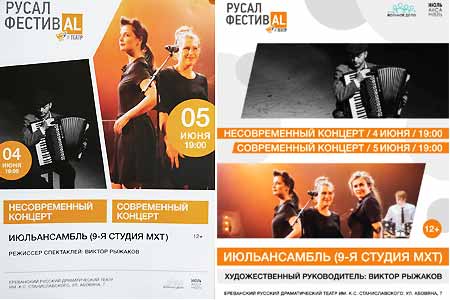 ArmInfo.The RUSAL company, one of the world's largest aluminum producers, is implementing the project <RUSAL Festival # Theater in Yerevan. The goal of the project is to support interest in culture and theater, the press service of  the company said.

RUSAL FESTIVAL # Theater is held for the third year in the cities  where RUSAL is present. Spectators are shown performances by  well-known directors who lead creative teams from graduates of the  Moscow Art Theater School. Yerevan is included for the first time in  the program of the theater festival of RUSAL.  The Russian Drama  Theater named after K.S. Stanislavsky. An independent theater troupe  "Julyansambl", which grew out of the workshop of the head of the  Center. Su Meyerhold, teacher of the Moscow Art Theater  School-Studio, director Viktor Ryzhakov.

On June 4, guests will show the performance "Not modern concert."  This is a gallery of portraits of people of the older generation, an  attempt to fix the outgoing, elusive time. On June 5, viewers will  see the production entitled "Modern Concert", where the history of  the whole XX century is told to the music of the smash hitters.

The program of the project also includes a master class by the  artistic director of the "Julyansambl", directed by Viktor Ryzhakov.  Head of the Yerevan Institute of Theater and Cinema Ruben Babayan  will help to meet with Armenian students.

The Theater Festival of RUSAL is a social project of the company.  Tickets for the performances are free, distributed to cultural and  educational institutions, among representatives of theatrical  environment, employees of the ARMENAL plant included in RUSAL.