David Tonoyan: In today`s Armenia there can be no treacherous actions 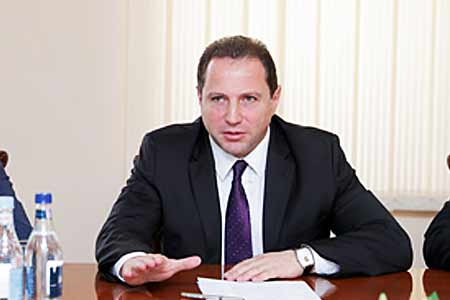 ArmInfo. Armenian Defense Minister David Tonoyan excludes the possibility of traitorous actions on the part of some individuals or forces in the republic.

"I, as the Minister of Defense of Armenia, will not allow something  like that to happen. This cannot be," said Tonoyan in Vanadzor to the  question "Azatutyun", referring to the statement of Prime Minister  Nikol Pashinyan that there are forces in the country ready for  treacherous actions.

To clarify whether this issue was discussed during a meeting with the  Prime Minister on May 20, Tonoyan noted that unconditionally. "And  this question, and a number of others. An assessment of the situation  was given. I believe that everything will be settled," he said.

He also found it difficult to say what forces we are talking about,  stressing that this is a political assessment of the Prime Minister  of Armenia.

On the question of whether the situation might be exacerbated and the  resumption of hostilities, Tonoyan said that the resumption of  hostilities is possible, and possible for several reasons.

Earlier, Armenian Prime Minister Nikol Pashinyan, in particular,  stated: "There are specific forces representing the former corruption  system that are trying to use the tools they used earlier - to  provoke disagreements, contradictions and even enmity between the  peoples of Armenia and Artsakh within the framework of the logic of  divide and rule" to conceal and justify corruption crimes committed  by them earlier, although it's obvious to everyone that our  compatriots from Artsakh suffered more often due to the systemic  corruption in Armenia, but some officials and this system is now  using corrupt connections for conducting a fictional campaign in  Artsakh against the Armenian government and the Prime Minister  personally. During the election campaign at the parliamentary  elections last year, I noted that, after analyzing the situation, I  see even an attempt to ignite conspiratorial war, even the surrender  of some territories in order to lay the responsibility on the  government of Armenia. "