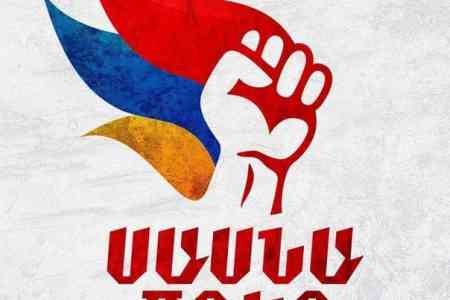 ArmInfo. The Secretariat of the Sasna Tsrer Party condemns the incident that occurred the day before during a concert dedicated to the Day of Europe, provoked by members  of the ''Adequate'' group.

According to the statement of the party, the participants of the  action were activists of the ''5th Russian column, who do not  represent the Republic of Armenia, the Armenian people and its  culture. " "We express our support to the distinguished Ambassador  Piotr Switalski and wish new achievements in the implementation of  his important and honorable mission," the party said in a statement.   To note, on May 21, during a concert in the opera house, during the  welcoming speech of the head of the EU delegation in Armenia, Piotr  Switalski, members of the Adequate movement broke into the hall,  shouting "Switalski Sik". Members of the movement were immediately  detained by police and Emergencies Ministry officers on duty at the  building and taken out of the hall. Then, they were brought to the  police station due to insubordination to the lawful demands of law  enforcement officers. Administrative proceedings were instituted  against members of the group, after the act was drafted, all those  who had been brought were released.

To note, on May 20 the participants of the movement staged a protest  action in front of the EU delegation in Armenia. Days earlier,  members of the movement quarreled with a member of the Council of  Elders of Yerevan from the My Step bloc Artur Ispiryan. On this fact,  the police are preparing materials. The group includes former adviser  to the former chief of the RA Police Vladimir Gasparyan Narek Malyan,  activist of the movement in support for the second president Robert  Kocharyan, accused of overthrowing the constitutional order,  associate of former defense minister Vigen Sargsyan Artur Danielyan  and Blognews editor Konstantin Ter-Nakalyan . To note, in his  statement, Switalski supported the actions of the new authorities of  Armenia regarding the "surgical reforms" in the judicial system.