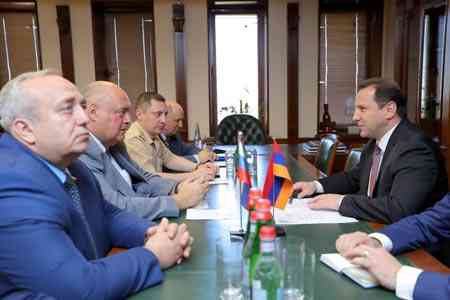 ArmInfo.The Ministry of Defense of Armenia made a statement in connection with the negative public reaction to the message about the reduction of obsolete military  equipment.

Thus, the press secretary of the Ministry of Defense of Armenia  Artsrun Hovhannisyan on his Facebook page, in particular, wrote: "On  the disposal of military equipment ... we are talking about the  equipment taken out of service for more than a decade, from which  everything possible was removed for use, and used. Recycling is  important for us both in terms of cost savings and their optimal use.  This will allow us to get other resources. The program has been  implemented by Armenia for a long time and within the framework of  international obligations. "

As ArmInfo previously reported Germany assisted Armenia on reduction  of 21 armored combat vehicles, which have lost their combat  significance. In this regard, the German Embassy in Armenia on behalf  of the  Government of Germany congratulated Armenia. "Through this  effort,  Armenia is now in compliance with the threshold for armored  combat  vehicles set by the Treaty on Conventional Forces in Europe  (CFE  Treaty). This treaty is an important pillar of security in  Europe and  the South Caucasus," the statement also reads. "The  reduction has  been made possible through a NATO Partnership for  Peace Trust Fund  project with Germany as the lead nation.  Germany   has provided more  than 1 million EUR for this project and stands  ready to assist other state parties in order to achieve full  compliance with the provisions  under the CFE treaty" said a  statement from the German Embassy in  Armenia, received by ArmInfo.

The embassy also reminded that the disposal of obsolete military   equipment was carried out within the framework of the NATO   Partnership for Peace program and Germany was its main implementer   "The German Embassy now look ahead to the remaining steps of the   Trust Fund project which include the demilitarization, dismantling   and disposal of 140 armored vehicles as well as the establishment of   an Explosive Remnants of War and Mine Risk Education (ERW/MRE)  capability within the Armenian Centre for Humanitarian Demining and   Expertise."