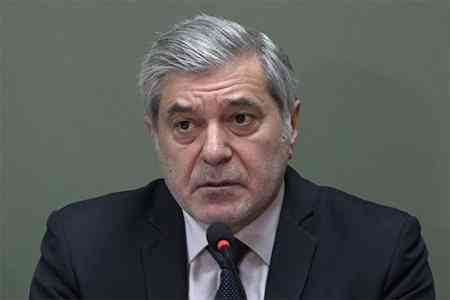 ArmInfo. Hovhannes Igityan,  Deputy Chairman of the Standing Committee of the National Assembly of  Armenia on Foreign Relations, comments in an interview to ArmInfo on  the latest trends in Armenia's foreign policy. He shares his own  vision of the Armenian agenda in the Karabakh settlement in the light  of changes in the international perception of the country. He also  discloses the agenda of the initiatives of the Armenian delegation to  the PACE.

In your opinion, what changes, both positive and negative, can be  registered in Armenia's foreign policy a year after the change of  power in the country?

To begin with, in a world in which democratic values and human rights  are a priority, attitude toward Armenia has changed drastically  during the year. The attitude to our country has changed  dramatically, for example, in PACE, where I represent Armenia as part  of our delegation. Earlier, Armenia was sharply criticized for the  elections, however, finally those who criticized said something like  "the elections still became a step forward." Then we waved this "step  forward" like a flag at every corner. Today, in terms of the level of  development of democratic institutions Armenia holds one of the  leading positions among the countries, in which elections were  recently held. If we consider all the negative reports that had been  voiced on Armenia in PACE, related to any issue, we will see that the  statement of inferiority of the formation of power in Armenia has  always been at the core of them. As a result, such reports negatively  and significantly influenced any European projects in Armenia,  primarily economic ones. Thus, a year after the change of power, we  can state the transition of Armenia from imitation policy to real  politics. We began to talk with partners in the same civilized  language within the framework of the common principles and values.

The overall atmosphere is clear, and what about realpolitik? For  example, demonstrating a tendency to improve relations with Israel?

Relations with Israel are determined by changes in our relations with  another part of the world, where values often not related to human  rights are considered dominant. This world is called the post-Soviet  space and here we used to have a completely different problem. I do  not think that the leadership of Armenia used to ask the advice of  Russian counterparts on all issues. But many steps of Yerevan were  caused by fears of misinterpretation or even condemnation by Moscow  of this or that foreign policy manoeuvre of Armenia.  Such practice  derived from the policy of the former Armenian government. Today the  most important thing has changed - a legitimate government has been  established in Armenia, which, undoubtedly, affected its freedom of  action, political courage and initiative. There is still pressure on  Armenia today, but the times when our country changed its political  orientation or gave up a piece of the economy as a result of one  call, are already in the past. And outside of our long-term, in some  cases, enslaving, foreign policy commitments (a special thanks to the  Republicans for that) today we can take independent steps. As part of  these steps, we can constantly develop good neighborly relations with  Georgia, and they will not be directed against Russia. Similarly, we  can develop relations with Ukraine. As for Israel, relations with  this country have indeed always been considered by Armenia with great  cautiousness. Today, these relations can be developed and, I think,  will develop regardless of whether a country enters this or that  political or military bloc.

There is a certain confidence of the partner countries in relation to  the Armenian authorities, in general, and Nikol Pashinyan, in  particular. In your opinion, what are the reasons for that?  In our  conversations with partners, the taboos have been withdrawn. Armenia  conducts an open policy both in relation to the West and in relation  to Russia. And this is very important, because it is this openness  that gives independence to our actions. The former government  whispered in Moscow about its adherence to a strategic alliance with  Russia, and then whispered about its adherence to the European value  system in Brussels and Washington. And such practice was called  Armenian complementary policy. Relations with a country or bloc do  not develop with the aim of infringing on relations with another  country or bloc. This is a very simple formula of our government,  which is still not fully understood by some partners of Armenia.   Within the framework of this formula, Prime Minister of Armenia Nikol  Pashinyan speaks openly from the rostrums in Europe about the  excellent relations of Armenia with Russia. After that, from the  rostrum in Moscow, he also openly voiced his intention to deepen  relations with the EU within the framework of CEPA, relations with  NATO within the framework of international peacekeeping, relations  with Iran, etc.  As a result, no one will think out more than what  has already been said, to look for some kind of discord, in other  words, to look for something that does not exist.

The need to clarify the Madrid principles and the return of Artsakh  to the negotiation process is also part of this open policy of  Yerevan, isn't it?

Let's not call this document "Madrid Principles". This document has  been reviewed and shortened by the parties to the conflict so many  times that, by and large, they do not exist today as the three  principles and the six elements of a settlement. In my opinion, the  time will come when even such an elementary issue as the demarcation  of the borders between Artsakh and Azerbaijan will not be resolved  without Artsakh. The position of Armenia on this issue is very clear  and logically substantiated - the Karabakh issue is being discussed,  so the Karabakh people should be among those discussing. The  leaderships of Armenia and Azerbaijan are meeting to discuss the  prerequisites necessary for the resumption of negotiations, and not  to announce their victory at the end of the meeting. Armenia declares  the need to prepare societies for peace, because it is impossible and  wrong to go on negotiations with hate moods. Armenia is ready to  discuss the implementation of humanitarian steps. First of all, stop  shooting at civilians and allow relatives to visit people in  captivity. And there are no problems related to the implementation of  such steps, only will is needed.

By the way, why did they stop shooting?

They don't shoot not because Azerbaijan has suddenly changed and has  suddenly become different. The agreement on the need to create  conditions for the observance of the ceasefire regime between the  leader of Armenia elected by the people and the leader of Azerbaijan,  claiming to be elected by the people, is already an obligation at  least in the presence of the Minsk Group co-chairs. And this does not  require signatures and seals under it. Armenia made a democratic  breakthrough and it is impossible to reject this factor. And in this  new situation, any oral statement by the leaders of Armenia and  Azerbaijan cannot be considered imitative.

It seems that today Baku is making significant efforts to prevent the  implementation of the Armenian agenda of negotiations. At first it  turned to Moscow for help, now, judging from Mammadyarov's statement,  to Washington. Or are there other factors?

Azerbaijan continues by inertia to make statements aimed primarily at  domestic consumption. That is why the actions of Azerbaijan in Vienna  or Moscow and the statements made in Baku do not have logical  connection. By inertia, the authorities of Azerbaijan continue to  demonstrate to their own population that they keep everything under  control, they have money, they buy weapons, and Russia and Israel are  interested in such a client. In my opinion, today this component is  no longer as effective as yesterday, if only because the Azerbaijani  laundromat has already become an international term specifically used  when talking about Azerbaijan. And I do not think that Moscow or  Washington like the demonstration by Azerbaijan of its alleged  ability to organize meetings of foreign ministers by just one  statement. It never happens like this anywhere; it's a mauvais ton  and a violation of diplomatic ethics. Baku today is also trying to  draw parallels between Karabakh and the territorial problems of other  countries in order to demonstrate that they are members of one club  affected. We have already started working in this direction and we  already have the first successes. These are completely different  issues and it is wrong and impossible to consider them in the same  light. First of all, it harms Ukraine and Georgia, bringing to  Azerbaijan only a short-term and illusory advantage.

Let me ask a rather complex question for the MP representing the  ruling party. In recent years, Russia has been slowly but  consistently losing international influence and the ability to  determine the agenda even in the post-Soviet space. Is it reasonable  for Armenia to deepen and develop strategic relations with Russia  against the background of such trends?

First, many of our obligations to Russia are based on a legal  framework. Secondly, Armenia was able to avoid identifying Russia's  international problems with Armenian-Russian relations. These are two  completely different questions. As for security issues: energy,  economic, political, geopolitical, regional and even military,  Armenia, of course, needs diversification: diversification in order  to have answers to possible challenges. And here the security of  Armenia is not tied only to the CSTO, only to Russia, or only to the  EAEU. Our security relies on diplomacy and the army, on the  development of the country, reforms in the economy and the army, and  of course it is associated with work with other organizations and  countries.

Mr. Igityan, with what new initiatives have you personally returned  to PACE after a long break?

The first thing that our delegation did in PACE at meetings with  colleagues from other countries and the leadership of the Council of  Europe is that the Armenian delegation did not come to Strasbourg to  fight the Azerbaijani. At the same time, we voiced full readiness to  compete with colleagues from a neighboring country in matters of the  level of democracy, because in the Council of Europe countries are  united by the values of democracy and human rights. And these were  not just words. At the last two sessions of the PACE, delegates were  surprised to see how Azerbaijani colleagues always jumped from their  seats and explained problems with freedom of speech and arrest of  journalists in Azerbaijan by the occupation of 20% of territories and  a million refugees. Previously, the Armenian delegation jumped in  response, ran to the microphone and blamed Azerbaijan in Sumgait,  Maraga and other sins. Our delegation prefers to simply ignore such  antics of our colleagues. We prefer to talk about the development of  democracy in Armenia, about our vision of Karabakh settlement in  terms of regional development, development of civil society, etc. In  other words, our activity fully meets the goals of the PACE, and it  is not directed against Azerbaijan. We consider PACE as a place where  you can search for common ground with Azerbaijan, and I hope that in  time we will manage to teach this to our Azerbaijani colleagues. In  any case, we came to PACE with this. For the time being, Azerbaijan  faces certain difficulties in PACE - democracy and human rights are  definitely not its platform.