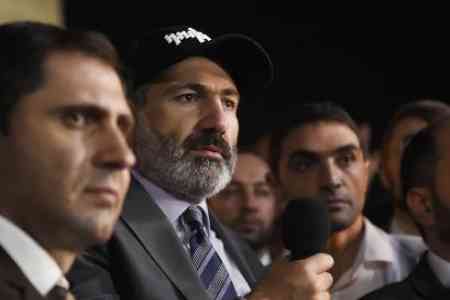 ArmInfo.Armenian Prime Minister Nikol Pashinyan called the readiness of every Armenian to be responsible for the consequences of resolving the conflict an  important condition for a successful resolution of the  Nagorno-Karabakh conflict.

He stated about this on April 22 at a meeting with the Faculty of Economics and Management of the Yerevan State University.  According to the prime minister, today, when the Armenian leadership is negotiating on Karabakh, no one gives him  specific instructions or explains what the solution to the conflict  should be. In the meantime, according to Pashinyan, the time has come  to decide on our expectations from the negotiation process,  how we  imagine the solution of the issue.

As the head of the government stressed, the process will go more  successfully, as soon as the Armenian people understand what it will  face in 50, 100 years: will it go through international recognition  or continue the negotiation process.

At the same time, as Pashinyan pointed out, he has his own ideas  about the resolution of the conflict. "But I don't want to resolve  the Karabakh issue within the framework of my ideas, as I continue to  believe that the decision lies with the entire Armenian people," he  said, calling on all Armenians to consolidate.  According to the head  of the Armenian Cabinet, it is necessary to articulate your  expectations from the negotiation process. "We should decide on  whether each Armenian is ready to bear responsibility for the  settlement of the Karabakh issue," said Prime Minister Nikol  Pashinyan.